The most prestigious title in club soccer is on the line tonight at Wembley Stadium, when Manchester United and Barcelona face each other in the UEFA Champions League final. This “Heads Up” is the culmination of a competition that started in June of last year, with 76 teams competing for the honour of being the best football team in Europe. 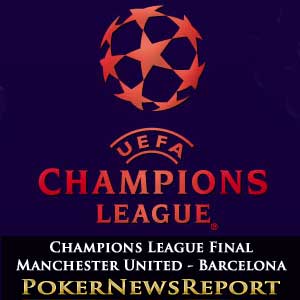 The most prestigious title in club soccer is on the line tonight at Wembley Stadium, when Manchester United and Barcelona face each other in the UEFA Champions League final. This “Heads Up” is the culmination of a competition that started in June of last year, with 76 teams competing for the honour of being the best football team in Europe.

Considering their recent domestic dominance, it seems incredible that both teams have won the tournament just three times previously – and they have a long way to go to overhaul Real Madrid´s record of nine victories in the tournament. It is like Eric Seidel or Phil Ivey trying to overhaul Phil Hellmuth for WSOP bracelets. Setting records, however, will be furthest from the minds of Sir Alex Ferguson and “Pep” Guardiola as they lead their respective teams out onto the Wembley turf tonight.

Expect both managers to have an MTT approach at the start of the game. Although they will have been keeping notes on their opponent´s strategies throughout the season, both teams are expected to keep their cards close to their chest in the early exchanges and play with caution. As the first half progresses, any chance to take a lead will be met with a defensive strategy by the opposing manager, and possible fine tuning by means of a reallocation of resources or an early substitution.

As the players take a break from the action, managers will be reflecting on what has occurred in the first 45 minutes and instructing their teams on where they believe they can gain an advantage. Any weaknesses which have been seen in the opposition will be highlighted, and plans laid out on how to exploit those weaknesses when the opportunity arises. When the players return to the pitch, they will know they need to apply discipline and patience in order to lift the trophy at the end of the game.

The second half gets under way with Barcelona playing the more attacking and flamboyant football. Lionel Messi opens up the United defence when he dummies a shot and allows the ball to run through his legs to an unmarked David Villa to crash home from the edge of the area. Messi´s bluff provides Barcelona with a valuable advantage, but United respond by pressing hard against the Barcelona defence, and when Wayne Rooney is tripped just inside the Barcelona area with just five minutes remaining, he calmly slots home the resulting penalty against Victor Valdés to put United level.

The stakes get higher during extra time and tempers start to get frayed. The pressure tells on Barcelona´s Iniesta who goes on tilt with a rash challenge on Paul Scholes and is sent off. United use their advantage in midfield to press even harder on the Barcelona defence, and eventually Park Ji Sung is put through on goal with an ace of a delivery from Ryan Giggs. The South Korean international makes no mistake and United take the lead. Barcelona, being short-stacked with the departure of Iniesta, do not have the resources to make a telling impression on the remainder of the game, and Manchester United are crowned European Champions.

Soccer is a lot like poker inasmuch as you need a strategy and the discipline to stick with it, yet the versatility to change it if necessary. Winners need to be both patient and flamboyant, and able to take chances without losing their head if things do not always go to plan. The reward for winning is worth the commitment that is put into the game, and the losers will come away a little wiser and more prepared nest time the teams engage in combat.

It will not be lost on poker players that, as one major sporting championship draws to a close, the World Series of Poker starts in Las Vegas. Keep up to date with the news, results and reactions from the greatest poker event of the year with Poker News Report.