Chad Holloway has won Event #1 of the WSOP, the $500 Casino Employees No-Limit Hold’em event. Holloway won $84,915 for his strong play during the two-day event. 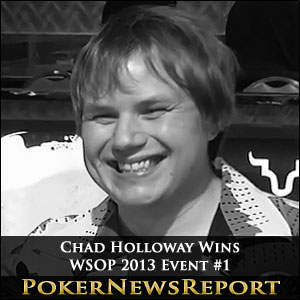 Chad Holloway has won Event #1 of the WSOP, the $500 Casino Employees No-Limit Hold’em event. Holloway won $84,915 for his strong play during the two-day event.

It’s the first ever WSOP Gold Bracelet win for Holloway. His biggest previous cash $3,719 in the $1,500 NL Hold’em event at last year’s WSOP. The Wisconsin native was third on the chip ladder going into the second and last day of the event, and he maintained his top play to eventually take the chip lead and the victory.

Holloway won a big and hand at the final table that helped him gain a commanding chip lead with just seven players remaining in the tournament. It came against Michael Trivett, who bet 27,000 before the flop. Holloway, who had Ace Eight off suit, three-betted to 77,000, a move that was Trivett, who had King Jack off suit, responded to by going all in which Holloway called.

The flop came Ace of Clubs, Seven of Diamonds and Two of Spades, giving Holloway top pair. The Seven of Hearts on the turn left Trivett drawing dead and his fate was sealed after the King of Spades was shown on the river, knocking him out of the event in eighth place. This boosted Holloway’s stack to 660,000 chips.

Holloway would further improve his stack to 869,000 chips after eliminating Sean Small in sixth place shortly after. Holloway hit a pair of fours on the flop with his Ace Four, which was enough to beat Small’s Jack High and knock him out of the event.

It was not all good news for Holloway throughout the final table, however, with his stack taking a battering after being on the wrong end of a showdown against Brian Pingel. Pingel went all in before the flop with his Ace Jack of Diamonds, which Holloway called with his Ace Ten off suit. The board did not give Holloway any reprieve and Pingel doubled up, reducing Holloway to 485,000 chips.

He regained his chip lead in a big way after doubling up in a hand against Bobby Rooney, which left Rooney extremely short stacked in three-handed play. Allan Kwong would finish the job Holloway started and knocked Rooney out of the tournament in third place, resulting in the beginning of heads-up play.

After more than an hour of heads-up play, the last hand of the tournament was played. Kwong raised to 75,000 before the flop, which was called by the eventual winner. The flop came Five of Clubs, Queen of Spades and Queen of Diamonds, after which Hollaway checked before Kwong raised another 85,000 chips. Holloway reraised which Kwong responded to by moving all in.

Holloway promptly called before showing his Queen Nine, giving him three of a kind after the flop. Kwong on the other hand, showed Ace King off suit, which meant he had little hope of winning the hand. The Ten of Hearts on the turn and the Two of Diamonds on the river was of no help and Kwong was knocked out in second place, making Holloway the winner of the first event at this year’s WSOP.