Convicted payment processor Chad Elie has recently taken to Twitter to make some comments and post documents that pertain to the legality of online poker. 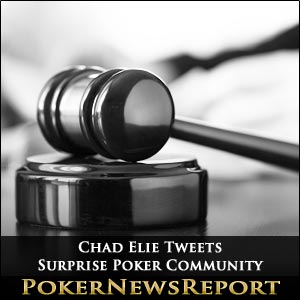 Convicted payment processor Chad Elie has recently taken to Twitter to make some comments and post documents that pertain to the legality of online poker.

Elie is set to serve a five-month jail sentence in January after pleading guilty to processing financial transactions between banks and the online poker sites of Full Tilt, PokerStars and Absolute Poker. Those sites were indicted on Black Friday, along with Elie and 10 other individuals.

The Twitter postings began this past weekend from the account of @BlackFridayChad, which several sources confirm to be Elie. Some of the documents posted include a letter from attorney Tom Goldstein pertaining to the DoJ’s stance on transferring funds to online poker sites. The letter states that, Transfers of funds related to on-line poker that are conducted accurately and transparently (including through accurate credit card coding), and pursuant to any license required for transferring money, are lawful.

Another document emanating from the firm of Ashcroft Hanaway asserts that online poker transactions violate neither the 1961 Wire Act or the Unlawful Internet Gambling Enforcement Act (UIGEA). A third document from the U.S. House of Representatives to both the Federal Reserve System and Dept. of Treasury urges government officials to delay implementation of the UIGEA for one year.

All the documents posted by Elie were originally thought to be confidential and unseen by the public. However, it has since been determined that the documents pertain to his case and are actually in the public domain.

Perhaps more revealing than the documents were the actual tweets by @BlackFridayChad, who took a shot at some comments made by Howard Lederer during his media interview tour after 1 and 1/2 years of silence. Lederer was quoted as saying in one interview that he never met with a payment processor. Elie, an admitted payment processor, tweeted in response to Lederer’s statement, Interesting Howard, do you not remember the MEETINGS we had? What about NYE?5hr meeting.