Chad Brown lost his battle with a rare form of cancer, passing away at the too-young age of 52. 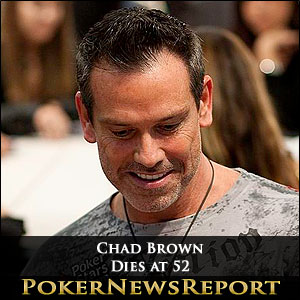 Chad Brown lost his battle with a rare form of cancer, passing away at the too-young age of 52.

Just a few days after receiving an honorary WSOP gold bracelet for his contributions to the game of poker, Brown succumbed to liposarcoma and died in his sleep. He had won the respect and admiration of his peers during a distinguished poker career that began on the live tournament tables in 1993.

A resume complete with earnings of more than $3.5 million that included more than half a dozen championships, none of those titles came in WSOP events for Brown despite numerous final table finishes. Prompted by urgings from the poker community, particularly from actor and poker player James Woods, the WSOP broke from tradition and presented Brown with the award after realizing that his health was rapidly deteriorating and he would never again play live tournament poker.

It was all too fitting that an actor would be the voice behind the recognition bestowed on Brown considering that Brown himself made a living as an actor and model before turning his full attention to the felt. The New York native had several roles in television and film, parlaying his good looks into a winning hand in Hollywood.

Brown also won the heart of fellow poker pro Vanessa Rousso. The two were wed after meeting through their affiliation as Team PokerStars Pros. Unfortunately, the couple divorced in 2012.

News of Brown’s passing has been met with an outpouring of condolences to his family and kind words from the poker community regarding how much Brown touched the lives of those he met. The PokerStars blog, where Brown had previously posted updates on his failing health, listed some remembrances from those who knew him best.

He (Brown) was unfailingly polite to people, willing to offer advice to anybody who asked, said PokerStars Head of Poker Communications Lee Jones. I never heard Chad tell a bad-beat story. Even when he had suffered the most awful beat of all, he kept his smile and wanted to hear your story, rather than tell you his.

Chad Brown was one of the finest people I’ve ever met, added WSOP Media Director Nolan Dalla. He had the extraordinary quality of being instantly likable to everyone.

The poker world collectively mourns the loss of Brown, who was diagnosed with liposarcoma just a few years ago. Many who will miss him take solace in knowing that he packed a lot of action into his 52 years on Earth, branching out in several directions in terms of professions. Brown seemingly excelled at them all, but perhaps more importantly, enriched the lives of those around him to an extent that is not often seen in a world that requires the winners to benefit from those who lose.