Cengiz Ulusu ended Day 1b of the main event at the EPT Berlin as overall chip leader to push Day 1a leader Vladimir Geshkenbein into third place. 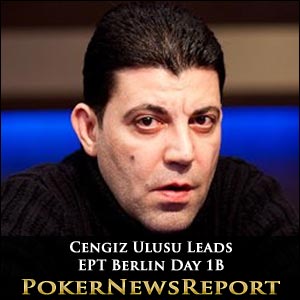 Day 1b attracted 502 entrants to take the total field to 745 players, while also promoting organisers to set up nine tables at the Spielbank Berlin to accommodate the overspill from the Grand Hyatt Hotel.

Just 210 players were left in contention at the end of yesterday’s second opening-day stream to add to the 110 from Day 1a, therefore ensuring that 320 players will return for this afternoon’s Day 2.

Ulusu Facing Some of the World’s Best

As Day 2 gets underway, Germany-based Ulusu – who was also joined by Day 1b’s second-placed qualifier, Oklahoma’s Calvin Anderson, on 205,100 chips – will feel confident of claiming one of the top prizes, although he’ll have to battle it out with some of the world’s best pros, including Swedish Team PokerStars Pro Viktor ‘Isuldur1’ Blom (109,900) and 2010 main event champion Kevin MacPhee (139,100).

The Idaho player – who enjoyed a good day to crack sets and flop sets – did not make the top 10 from Day 1a, however, with German Mario Puccini securing third place on 198,900 chips, Belgian Davidi Kitai ending fourth on 197,700 and Portuguese player Joao Ribeiro filling fifth with 196,600.

One-time World Poker Tour (WPT) champion Ramdin had managed to build a chip stack of 122,000 at one point, but then suffered as a succession of hands went against him.

The 43-year-old – who picked up $1,331,889 for winning the $9,700 buy-in No-Limit Hold’em Championship event at the WPT Foxwoods Poker Classic back in 2006 – flopped top set during one hand but lost out to an opponent’s straight, before getting his remaining 30,000 chips in while holding pocket queens and again losing, this time to kings.

Bonn’s Heinz, meanwhile, could not have exited in a more spectacular fashion as his queens ran into Austrian Ali Azabdaftar’s A♥ A♦ and the K♠ K♣ of fellow German Bahadir Kilickeser! How unlucky is that?

Heinz then shoved all-in for a total of 21,000, with Azabdaftar re-shoving for 70,000. Kilickeser took a few minutes to gather his thoughts and then called for his last 51,000.

Azabdaftar turned over his aces, while Kilickeser showed his kings and a very disappointed Heinz tabled his queens to see a flop of K♥ 4♠ 3♠. That gave Kilickeser trip kings for the lead.

Heinz needed a miracle to survive now, but the 6d turn killed off his chances, while the K♣ on the river gave Kilickeser quads to send Heinz to the rail and leave Azabdaftar with just 20,000 chips. The Austrian did, however, survive the day when battling back up to 49,700 chips.

Jake Cody Makes It Into Day 2