Celeb Poker is one of two former iPoker skins which have announced that they are merging with Titan Poker ahead of the division of the iPoker Network. 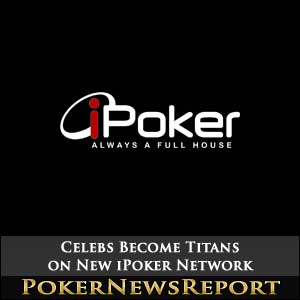 Celeb Poker is one of two former iPoker skins which have announced that they are merging with Titan Poker ahead of the division of the iPoker Network.

The first two casualties on the iPoker Network split due on September 1st became common knowledge yesterday as it was announced that both Celeb Poker and Dracula Poker were merging their player databases with Titan Poker. Titan Poker, who are already guaranteed their “A-list” status due to their volume of player traffic, will now become one of the biggest skins on the iPoker Network along with William Hill Poker and Paddy Power Poker.

Celeb Poker, who promised players that Fame and Fortune Awaits, never really made an impression in the online poker market after joining the iPoker Network in 2009 despite a higher-than average level of promotions and customer service. Formed back in 2003, Celeb Poker was aimed at the American market and, while still on the Boss Network, welcome celebrities such as Young Gun star Lou Diamond Phillips to its tables.

Sadly when Boss Media withdrew from the US poker market following UIGEA (October 2006), the flow of traffic on the site dwindled to a trickle and – with the tough new measures introduced by the iPoker Network to ring-fence the sites producing the best liquidity – the team behind Celeb Poker realised that any high net worth players they had remaining would leave the site and go play on another iPoker skin.

Pretty much the same fate awaited the owners of Dracula Poker – a smaller iPoker skin which predominantly catered for Hungarian and Romanian players – and although no official explanation has been provided yet for the transfer of players to Titan Poker, a notice appears on the Dracula Poker web site which reads:-

How many more smaller online poker sites may also close their doors due to the new measures introduced by the iPoker Network is yet to be seen, but you can keep up to date with all the latest poker news as it unfolds by following @PokerNewsReport.