North Carolina’s Carter Phillips picked up his second World Series of Poker (WSOP) gold bracelet – as well as $664,130 – with victory in event #31 in Las Vegas. 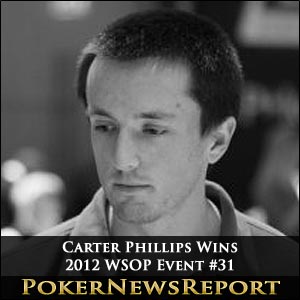 North Carolina’s Carter Phillips picked up his second World Series of Poker (WSOP) gold bracelet – as well as $664,130 – with victory in event #31 in Las Vegas.

In what was a gruelling heads-up clash, Phillips overcame Joe ‘The Kid’ Cada to add another piece of series jewellery to the bracelet he collected when winning the $1,500 buy-in No-Limit Hold’em Six-Handed event #16 back in 2010 for $482,774.

Additionally, with his triumph, Phillips denied start-of-day chip leader Cada the opportunity to become the first main event champion from the past decade to secure a second bracelet.

Only 19 players made it into the third and final day of this event, with the first two days seeing the field chopped back from its original 2,811 entries at the Rio All-Suite Hotel & Casino.

Favourite Cada was, however, the short stack once the final table had been reached, with Dwyte Pilgrim (11th for $38,214) and JC Tran (12th for $38,214) the two most notable pros to exit before play became nine-handed.

It took two hours before California’s Huy Quach exited in ninth place for $49,333 when his A♦ K♦ couldn’t overcome Cherish Andrews’ pocket jacks to leave him crippled. He was gone on the next hand when losing out to Jonathan Poche.

Louisiana’s Poche didn’t hang around for much longer, though, exiting in eighth place for $64,399 when his A♦ 3♣ was beaten out by the A♣ J♥ of Cada, while Florida’s Michael Aron followed in seventh place for $85,043 after seeing his pocket threes beaten by Cada’s tens.

Germany’s Maximilian Lehmanski was the next to hit the rail in sixth for $113,618 when his A♣ 7♦ lost out to the 7♣ 7♠ of Phillips, although Cada had again moved atop the chips chart.

Play slowed down somewhat once the final table had become five-handed. However, British player Najib Kamand was finally eliminated in fifth place for $153,578 after his A♦ J♦ lost out to the 10♥ 10♣ of Chicago’s Tom Chambers, before Pennsylvania’s Andrews exited in fourth for $210,083 as the last female seated at the event.

Andrews got all her chips in with pocket eights, but lost out to Cada’s straight after the board provided him with 2♦ J♣ 5♣ 4♥ 3♦ to add to his ace-king.

Pocket eights were also no good for Chambers against Cada, when the latter’s kings held to send the former to the rail in third place for $290,875. Chambers’ elimination, of course, set up the head-to-head between Cada and Phillips.

Champions Battles Back for Victory

Cada began with just over a 2 to 1 chip advantage, although that was quickly surrendered when he shoved all-in while holding K♦ 10♠. Phillips made the call to show A♥ Q♠ and then paired his queen on the flop to take the chip lead.

They would then battle it out over the next two hours or so, with Cada holding on by surviving two all-in shoves against Phillips. However, the final hand did arrive when Cada, on the button, shoved all-in with 9♥ 7♦ for 1,350,000 and Phillips called to show Q♣ J♦.

The 10♠ 5♠ 3♥ flop gave Cada little assistance, while the 5♦ turn left him with just six possible outs. But the 6♦ river was not one of those cards, meaning he fell just short of a second gold bracelet, although he did pick up $412,424 as runner-up.