Carla Sabini finished Day 2 of the PokerStars EPT London High Rollers where she started it – at the top of the leaderboard – but a lot happened in-between! 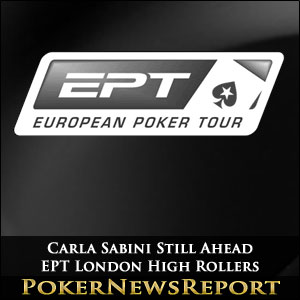 Carla Sabini finished Day 2 of the PokerStars EPT London High Rollers where she started it – at the top of the leaderboard – but a lot happened in-between!

Carla Sabini will no doubt be an unfamiliar name to many European Poker Tour regulars as her participation in the EPT London Main Event was the first time she had ever crossed the pond to play poker in Europe. A deep run in the Main Event encouraged Sabini to jump into the £10,300 buy-in High Rollers, which she now leads after a further 10 Levels of play during Day 2.

Six late entries (including Phil Hellmuth) and three re-entries brought the total number of entries to 157 (120 individual players); creating a prize pool of £1,538,600 after deductions which will be shared among the 23 top players, with £357,700 ($570,000) up top for the winner – more than double what Carla Sabini has won in her brief poker career to date.

The intention according to Silveiro was to call Shorr´s bet, and realising that he had placed too many chips on the table, he attempted to take some back. Shorr insisted that the floor was called, because any amount of chips more than half the original bet constituted a raise. After speaking with other players at the table, the floor found in Shorr´s favour and Silveiro was forced to increase his bet to 32,800.

Shorr responded by moving all-in and, after tanking for a couple of minutes, Silveiro made the call – creating the biggest pot of the tournament to date. Shorr turned over K♥ 4♣ for top pair, but Silveiro showed Q♦ 2♦ for the second nut flush and bust his opponent from the tournament and at the same time moved into the chip lead.

Throughout the next few levels the chip lead in the EPT London High Rollers changed hands more often than a Daniel Negreanu rant. Shawn Buchanan and Dan Shak both made it to the top of the chip counts during Level 12 – Shak busting out Jason Mercier 6♠ 6♥ > 9♠ 3♠ – and Philipp Gruissem got to the top of the leaderboard after busting Stephen Silverman in Level 13 6♠ 6♦ > A♥ K♠.

After the dinner break, it was PokerStars Pro Ville Wahlbeck´s turn to lead the tournament after busting out Erik Seidel A♥ A♣ > A♦ K♦ – although Wahlbeck had a major sweat on the flop of 6♦ 9♦ K♣ – and Sorel Mizzi also made a appearance at the head of the chip counts following the elimination of Shawn Buchanan A♥ K♣ > 10♠ 10♦ and Jonathan Duhamel A♣ J♥ > A♦ K♦ to burst the bubble.

An interesting statistic (courtesy of Vicky Coren) was that, among the 120 individual entries for the EPT London High Rollers, there were only three women – herself, Sabini and PKR Poker´s Sofia Lovgren – and all three made the money. Coren (A♦ Q♣) bust in 20th place after Tamer Kamel (K♥ J♥) caught trip Jacks, and Lovgren finished in sixteenth when her A♣ 7♣ failed to improve past Dan Shak´s 9♥ 9♣; but Carla Sabini took revenge on behalf of the ladies when eliminating Dan Shak in fourteenth place Q♥ Q♠ > 8♥ 8♣ to put herself back on top of the leaderboard.

Looking Ahead to the Final Day

Just twelve of the eighty-three players who started Day 2 survived until the end of play and will take their seats at the Grand Connaught Rooms today to play down to a winner. When play resumes, the tournament will be entering Level 21 (blinds 10,000/20,000 – ante 3,000) with the full chip counts as follow:-