Carla Sabini leads the PokerStars EPT London High Roller Event after Day 1, ahead of a stacked field of professionals – which does not include Daniel Negreanu. 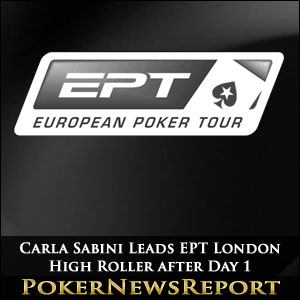 Carla Sabini leads the PokerStars EPT London High Roller Event after Day 1, ahead of a stacked field of professionals – which does not include Daniel Negreanu

The EPT London High Roller Event got underway at noon yesterday, and it was the last chance saloon for a number of the PokerStars pros to make their trip to London profitable before they ride off with their backs to the sunset towards Paris (because Paris is east of London and the sun sets in the west) for the WSOPE.

By the end of Day 1, there had been 148 entries into the £10,300 buy-in tournament (some deep-pocketed players having fired a second bullet after being knocked out during the early levels), creating a provision prize pool of £1,435,600. However, as this is a single re-entry event which remains open until noon today, those numbers and the prize pool could increase further.

Finger in a Familiar Position

Ten one-hour levels were played yesterday and the early pace-setters included Yaron Zeev Malki who flopped a full house with 7♥ 2♥ and got three full streets of value against PokerStars pro Luca Pagano 4♥ 4♦ (who rivered a lesser full house), and Simon Higgins (A♦ A♣), who was shoved into by Mike Watson (K♦ K♠) and whose Aces held.

As more stars arrived to take their seats, the action quickened. Andrey Andreev (3♦ 4♦) crippled PCA Main Event winner Dimitri Danchev (A♣ K♥) with Quad Threes, and Super High Roller winner Martin Finger became the first player to break through the 100,000 chips barrier (players had 50,000 starting chips) when a check-shove in Level 4 forced Randall Flowers out of a valuable pot.

Daniel Negreanu´s trials and tribulations in High Roller Events continued yesterday. It was during the EPT High Roller in Barcelona that Negreanu threw a paddy fit after his hand was declared dead due to the “First Card” rule. Negreanu re-entered the tournament once he had cooled down and finished second behind Thomas Muhlocker.

Yesterday it was the turn of Salman Behbehani to upset the PokerStars Pro when the American slow-rolled Negreanu out of his entire chip stack in the first hand he sat down to. Negreanu had been dealt Q♣ Q♠ and after the board of 8♥ 4♠ 3♠ / 2♠ / 8♣ had been completed, Behbehani (K♠ 10♠) put Negreanu all-in and announced that he had Deuces after Negreanu called. Negreanu smirked and thought he had won the pot until he realised he had been fooled by Behbehani´s Turned flush.

As happens when Negreanu has something on his mind, the world has to know about it. Negreanu´s Twitter account took a bashing again – fortunately not quite as abusively as when he got upset in Barcelona:-

Was really surprised he did that. I don’t get the humor, just seems like a jerk move in every situation to slow roll someone. Weak comedy

Behbehani carried on increasing his chip stack – busting out Eric Sfez when his 8♦ 8♣ made a set on the flop – and had amassed 180,000 chips when the dinner break arrived at the end of Level 6 (blinds 300/600 – ante 75). Negreanu re-entered almost immediately, but lasted less than one level and was sent off to go and play in the side events by Max Greenwood, after Negreanu got all-in with J♦ Q♦ (for top pair) and was shown pocket Aces by Greenwood.

Salman Behbehani did not maintain the chip lead in the EPT High Rollers event for very long, as players around him chipped up by winning some big hands to overtake him at the top of the leaderboard. Antonio Lafosse (Q♥ Q♠) came from behind to eliminated Fabian Quoss (K♦ K♣) when four Spades were dealt on the board, and Frederick Jensen took a huge stack from David Baker when his K♥ K♣ survived against Baker´s missed straight and flush draws.

Behbehani did not help his own cause – misreading his A♦ 3♠ as being suited, and donating a stack of chip to Carlos Chadha, who did have suited cards (9♠ 5♠), and who caught the flush on the flop. Amongst other players to overtake Behbehani before the close of play were Jason Mercier (who bust Steve O´Dwyer with pocket Sixes) and Sorel Mizzi, who was giving Kevin MacPhee plenty to think about with some aggressive post River betting.

Day 2 of the EPT High Rollers gets underway at noon, by which time any players who have not already fired a second bullet, but who want to re-enter (or even enter for the first time), must have registered and paid up their £10,300 buy-in. When the tournament resumes at the Grand Connaught Rooms in Covent Garden, the game will be entering Level 11 (blinds 1,000/2,000 – ante 300) – so late registering players will have 25 big blinds to spin up into a prize winning stack.

Players with significantly more than 25 big blinds when the chips were bagged and tagged last night include:-