SpadeClub.com the popular subscription-based online poker site from CardPlayer Magazine has closed its doors and shut down due to continued negative revenue. The site actually proved very popular amongst players because for just… 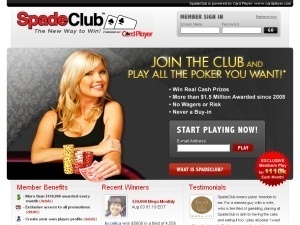 SpadeClub.com the popular subscription-based online poker site from CardPlayer Magazine has closed its doors and shut down due to continued negative revenue. The site actually proved very popular amongst players because for just a monthly subscription fee they could enter a variety of poker tournaments and best of all for US poker players – it was legal due to it being a subscription site instead of a site players were wagering money against each other.

Due to the UIGEA law in 2006 lots of online poker sites pulled out of the US market leaving players with a handful of trusted sites to play at. CardPlayer Magazine saw this gap in the market and opened Spade Club in February 2008 offering players the chance to participate in weekly online poker tournaments worth $5,000 as well as a monthly tournament worth $30,000 for just a subscription fee of $20 per month.

The site seemed to be very popular with over 200,000 members however it has now been publicly announced that the site struggled and found it very hard to profit. Barry Shulman (owner of CardPlayer Magazine) stated that the company was actually losing money and that they almost had their first break even month around a year ago however the site then began having processing problems and were unable to overcome them. Even son Jeff Shulman’s appearance at the 2009 WSOP Main Event sporting Spade Club logos didn’t provide the much needed impact they had hoped for.

Spade Club members have been notified that they now have 30 days to close their accounts however for players wishing to continue with a subscription based site you will be happy to hear that they will be given to opportunity to be switched over to the ZEN Entertainment Network and that the company will honor time left on their accounts.