Carbon Poker has introduced a new fast format Sit & Go game – “Supersonic” – claiming that the accelerated game play will appeal to all styles of player. 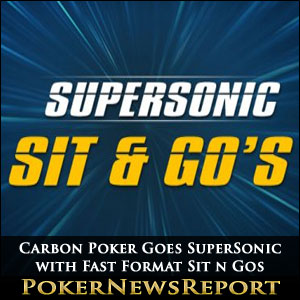 Carbon Poker has introduced a new fast format Sit & Go game – “Supersonic” – claiming that the accelerated game play will appeal to all styles of player.

Last week Carbon Poker launched its new fast format Supersonic Sit & Go games, and judging by the early response to these new games, the format has been an instant hit. Promising to deliver “the fastest poker you have ever played”, the concept behind the new games is that reduced level lengths result in more exciting play – a feature which has already attracted hundreds of players to test out the new game.

The Supersonic Sit & Gos are available in a “winner-takes-all” 4-Max format and as a heads-up contest, and they take speed poker in tournament format to a new level; ensuring that games are completed in record time due to the removal of the time clock. In addition to the revised blind structure, there are also financial incentives for players to compete in the Supersonic games with reduced buy-in fees resulting in more money going to the winner.

As mentioned above, the new “Supersonic” Sit & Go games are being offered in 4-Max and heads-up format and each has its own variations between the new games and Carbon Poker´s existing hyper turbo Sit & Gos.

The primary difference between the 4-max Supersonic Sit & Go games and the 6-Max hyper turbo games is that the winner of the 4-max Supersonic game wins all the money (the prize money is divided 65/35 between first and second place in the 6-Max hyper turbo games). The winner of the game also receives a proportionately bigger prize due to the discounted buy-in fees. For example:

Blind levels in the 4-Max Supersonic Sit & Go games are only two minutes in length, with new levels being inserted at the beginning of the game (blinds 10/15) and at Level 7 (blinds 50/100). What this means for players is that their starting stack of 300 chips is worth 15 big blinds at the beginning of the game, rather than the 10 big blinds in the hyper turbo games where blinds start at 15/30.

The new format for Supersonic heads-up Sit & Go games promises to accelerate heads-up poker to a new dimension. The length of levels has been reduced to just one minute each, and although new levels have been introduced at the beginning of the game (15/30 and 20/40), players will find that their 1,500 starting stack is soon under pressure as blinds rise quickly thereafter.