The Poker Maximus II series starts on Thursday and Carbon Poker are offering clients a $1,000 reload bonus among a number of September promotions. 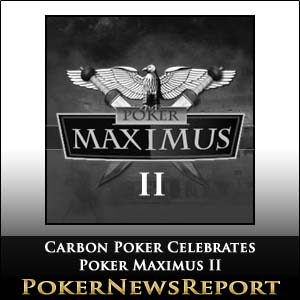 The Poker Maximus II series starts on Thursday and Carbon Poker are offering clients a $1,000 reload bonus among a number of September promotions.

Following the success of the initial Poker Maximus series, the Merge Network is hosting another eleven-day online poker extravaganza, starting on Thursday September 6th and culminating with a $200,000 guaranteed Main Event on Sunday September 16th. As with the first Poker Maximus, a number of different disciplines are included in the schedule – including Pot Limit Omaha, Pot Limit Omaha Hi/Lo, a mixed PLHE/PLO event and two HORSE tournaments.

Although being run at the same time as the PokerStars WCOOP, Poker Maximus II is expected to be a major success. The start times for the tournaments are aimed at Stateside poker players, so any RoW player who busts out early in a WCOOP event will still have time to register for one of the Poker Maximus tournaments. Furthermore, in addition to buy-ins starting from just $11.00, there are also dozens of satellite tournaments and SnG games being played in the run up to the series in order to allow skilled players with a limited budget to qualify for the feature events.

The $1,000 reload bonus being offered by Carbon Poker is a great incentive to get involved in the Poker Maximus series. However, players should be aware that whereas the first depositors bonus of a 100% match up to $600.00 (or $750.00 if you use the Carbon Poker bonus code “[bonuscode room=”carbonpoker”]” when making your first deposit) is released in increments of $5.00 each time you collect 375 VIP Points, the $1,000 reload bonus (use Carbon Poker bonus code “PM1000”) will be released in increments of $5.00 each time a player collects 500 VIP Points. It makes the Carbon poker reload bonus a little harder to achieve, but well worth going for (and better than PokerStars 20% up to $100.00!).

In addition to the Carbon Poker reload bonus (and 35% rakeback don´t forget!), there are a number of significant promotions being hosted on Carbon Poker through September. A “Last Man Standing” VIP Points challenge is already underway, a steps program is in place to win a package to the Punta Cana Poker Classic in November and the regular “Tourney King” leaderboard promotion with $20,000 in prizes is continuing throughout the Poker Maximus II series – offering players who compete in the series´ feature events the chance to top the leaderboard with just one win!

The Merge Network has been tinkering with the schedule for the Poker Maximus II series right up until the last minute to accommodate the games that will be most popular. Therefore, the best place to review the tournament schedule is in the Carbon Poker tournament lobby. Because the way the lobby is set up, players looking for games other than Texas Hold´em will have to select their game of choice from the menu bar at the top of the lobby.