Brazilian Luis Campelo and American Will Jaffe will be back for a fourth day in the $1,000 buy-in No-Limit Hold’em event #54 at the World Series of Poker. 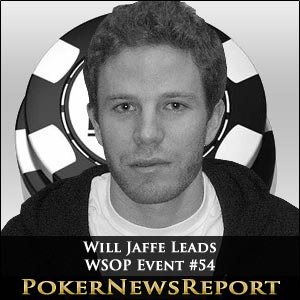 Brazilian Luis Campelo and American Will Jaffe will be back for a fourth day in the $1,000 buy-in No-Limit Hold’em event #54 at the World Series of Poker.

As has become common at this 43rd annual staging of the world’s biggest poker festival, a fourth day will be required to find a winner after 13 more players were eliminated on Day 3 in the chase for the god bracelet and $500,075 top prize at the Rio All-Suite Hotel & Casino in Las Vegas.

Neither player has a WSOP bracelet, so railbirds will again see a new champion crowned in the Amazon Room of the Rio from an event that attracted 3,219 players.

Day 3 started out with 15 players still in contention for WSOP glory, but New York’s Clayton Fletcher hit the rail early on for $22,640 when his K♥ J♥ failed to better the A♠ J♠ of Canada’s Nghi Van Tran.

Baker will certainly feel hard done by after seeing his A♠ K♠ lose out to Campelo’s K♣ J♠ after a board of three tens, a queen and a jack provided the surprised Brazilian with a full house and the American with a straight. Campelo actually though he was eliminated and was about to shake Baker by the hand before being informed that he had doubled-up. Poor Baker – who now the short stack – exited just a few minutes later.

Wisconsin’s Joseph Kuether began to gather momentum at this point as he took over as chip leader, sending Irishman Jason Tompkins to the rail in sixth place for $85,981 before also eliminating Ken Fishman, of Florida, in fifth for $116,072 to strengthen his position at the top of the leaderboard.

Van Tran, of Ontario, was next to exit in fourth place for $158,512, while three-handed play started off slowly as Campelo, Kuether and Jaffe were happy to steal the blinds and antes.

However, something had to give eventually and a pot did develop between Campelo and Kuether that saw all the chips in the middle on a Q♣ 9♥ 10♥ flop. Kuether was ahead with his Q♥ 10♠ for top two pair against the J♥ 10♣ of Campelo. However, the 5♥ turn handed Campelo a hearts flush draw to go with his straight draw, while the 8♠ river completed the Brazilian’s straight for a double-up. Kuether had been chopped back and was sent to the rail soon after by Jaffe.

Jaffe and Campelo began their heads-up clash by playing some small pots and ended Day 3 in the same manner as the chip counts remained fairly steady and close.