California Senator Lou Correa has amended his bill SB40 in extra effort to have the state “quickly secure potential online poker revenues before the opportunity is lost”. 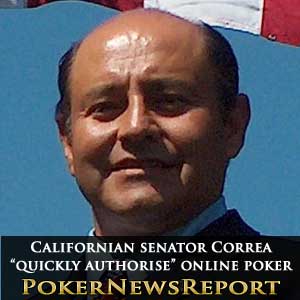 Lou Correa, a California Senator, has amended his California bill SB40 in an extra effort to have the state “quickly secure potential online poker revenues before the opportunity is lost”.

Following the events of last month’s ‘Black Friday’, Senator Correa has upgraded the online poker bill to an urgency category, resulting in the bill remaining active to progress at this year’s legislative phase without having to beat committee deadlines.

While the urgency status must still be signed off California governor Jerry Brown, it will become active the moment he does.

Correa believes that, “with federal action looming and the market wide open, we have to quickly authorise online poker in California”, adding that “to delay will mean the loss of more than $1.4 billion in new state revenue at a time when it is severely needed”.

The 53-year-old took these figures from a recent study carried out by Tim Gage – a former finance director for the state – and predicts a 47% increase over earlier estimates because of last month’s closing down of several large online poker sites by United States federal authorities.

Correa’s bill, called ‘California First: The State Funding, Job Creation & Online Gaming Accountability Act’, is being set up to broaden California’s current poker laws to include the Internet and allow for five poker sites to be authorised.

If successful, three poker sites would immediately be launched after receiving a license from the Bureau of Gambling Control, while the other two would become available by 2014 following a review of regulatory practices and licensing.

It is believed by many that the initiation of federal gaming legislation by John Campbell – the California Congressional Representative – would see revenue and jobs move to other states.

Therefore, backers of state licensing – such as Correa – are hoping to halt that possibility with SB40.

Correa said that “California must act and act quickly to control its future”, adding that “it is in the state’s best interest to harness the collective strength of our established and trusted gaming partners to maximize the benefit to California”.

While PokerStars is currently processing some players’ funds requests, many have received money after an agreement was struck with the Department of Justice four weeks ago.

Online poker players from the United States have not been able to withdraw funds from PokerStars, Absolute Poker and Full Tilt Poker after being shut down by the DoJ for suspected illegal gambling, money laundering and bank fraud on April 15.

PokerStars is the first poker site to give back funds, although it is not clear if Absolute Poker and Full Tilt will do the same – even though the latter reached a related agreement on April 20 with the DoJ.