A survey of registered voters in the Golden State found that Californians would prefer legalization of sports betting over online poker. 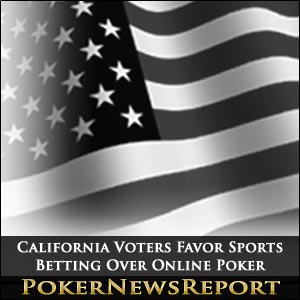 A survey of registered voters in the Golden State found that Californians would prefer legalization of sports betting over online poker.

A Field Poll conducted by questioning 997 voters and using a random sub sample of respondents numbered at 512 found that 58% would like to see sports betting legalized, while 35% were opposed. When questioned about regulating online poker, the results were more evenly divided, as 49% answered positively in regards to supporting online poker legislation and 45% were opposed. The margin of error factored into the poll sample is 4.5%, which indicates that residents are split on the issue of Internet poker legalization.

Sen. Roderick Wright (D-Inglewood) has sponsored bills on both forms of gambling that are still pending. Senate Bill 1396 would permit sports betting provided that the federal government changes course on its current prohibition. The bill passed a Senate vote and is before the General Assembly. And SB 1463, the proposal that would allow online poker, has undergone a number of changes and amendments in order to please the state’s many gambling interests. Indian tribes, card rooms and horse racing executives are all trying to influence the drafting of the bill in a way that would most benefit each and sometimes neglect the other.

In the middle of June, Sen. Wright removed SB 1463 from the agenda of a Senate committee prior to a vote by senators because it was not expected to garner a favorable vote. Since that time, Wright has attempted to listen to the concerns of each gaming interest, but has seemingly bent over backwards in an attempt to please everybody and reportedly wants to maintain a competitive balance in the marketplace. The California legislature is currently on summer recess and will be back in session Aug. 6. At that time, less than a month will remain to get the bill passed with an Aug. 31 deadline looming. Failure to receive Senate approval by that date will require the process to begin anew in 2013.

The sports betting bill, if passed and eventually allowed by the federal government, would require bettors to physically enter a casino or sportsbook and place a wager. The  online poker legislation would, of course, allow players to access online poker sites with a few mouse clicks from the privacy of their homes. Whether this is the reason for the disparity in approval between sports betting and online poker among poll respondents is anybody’s guess.