An online poker bill introduced in February in California was reclassified as “urgent,” but likely won’t advance before the current legislative session expires. 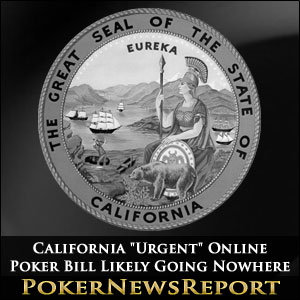 An online poker bill introduced in February in California was reclassified as “urgent,” but likely won’t advance before the current legislative session expires.

SB 678, proposed by Senator Lou Correa as a placeholder bill six months ago, was amended earlier this week to permit California’s Indian tribes and cardrooms to operate online poker. Although the measure now has the support of the powerful San Manuel Band of Mission Indians, the California Tribal Business Alliance (CTBA) has not endorsed the proposal, the L.A. Times reported.

This divisiveness within the tribal community has long stymied any efforts to bring about online poker legislation in the country’s most populous state. With only about three weeks remaining in the legislative session that ends September 13, Correa’s attempt to move things along by reclassifying the measure as being of an urgent nature will likely not have any impact on the measure gaining support.

Bills deemed urgent become law immediately after at least two-thirds of both the House and Senate vote in favor of passage. But with time running out, SB 678’s advancement does not look at all promising. Consider also that Senator Rod Wright, who chairs the first committee that would look at SB 678, has his own online poker bill in the hopper that permits the state’s horse racing interests to be included. SB 678 excludes racetracks and advance deposit wagering outfits.

Wright’s SB 51 was introduced last December. That poker-only measure has taken a back seat to other issues during the 2013 legislative session that state lawmakers have considered to be more important. Wright has not yet scheduled any hearings on either SB 678 or SB 51.

Some of the particulars of Correa’s reclassified bill include permitting the Golden State to opt either in or out of any future federal online poker bill, allowing interstate compacts, prohibiting Internet cafes to offer online poker, requiring the same launch date for all site operators to prevent a first-to-market advantage, a monthly 10% tax on gross revenue, tribes already holding gaming licenses would need no further investigation by state officials, and a bad actor provision that sets a December 31, 2006 cut-off date.

Also, various provisions of SB 678 can be tomahawked off the bill after the required aye votes for passage without mucking the proposal in its entirety. But insiders believe that won’t happen, as Correa’s measure is likely headed for the same fate as all the other online poker proposals introduced in California the past three years.