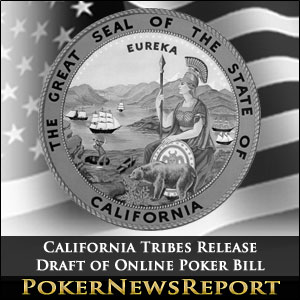 Eight of the state’s most prominent tribes have signed on in support of the proposal that’s titled the Internet Poker Consumer Protection Act of 2013. In a cover letter accompanying the draft measure, the tribes acknowledged that it’s exceedingly difficult to please all of the Golden State’s gaming interests and welcome input on the draft, which is seen by the tribes as “neither perfect nor final.”

The bill restricts online gaming to poker-only in an effort to protect revenue of the tribes’ land-based casino operations. The proposal also may impact the rest of the U.S. as it does not permit collaboration with other states. In anticipation of possible regulations on the federal level in the future, the tribes have included language in the bill that would see California opt out of any such plan.

This is terribly bad news for the rest of the country because California is the most populous state in the U.S. and would make a wonderful partner for other states such as New Jersey and Nevada that are hoping to vastly increase player liquidity via compact agreements. The tribes’ draft proposal also forbids any international partnership agreements.

The proposed online poker regime is open only to the state’s native tribes and card rooms. Only those who currently offer poker in licensed California establishments would be eligible. This excludes horse racing interests, which has been a sticking point of previous legislative attempts. No limit has been set of the number of online poker licenses that may be issued, but each licensee would have to be in operation five years prior to enactment of the bill. Also, each licensee would be permitted only one website.

With regards to bad actor provisions, the tribal bill forbids licensing to any online gaming company that accepted bets following passage of the UIGEA in 2006. Subcontractors who provide various services such as software or identity verification would not be accepted if those subcontractors were operating prior to the passage of the Internet Poker Consumer Protection Act of 2013. That would seemingly rule out all current existing companies.

License validity would be for a 10-year period that allows for a 10-year renewal as long as full compliance of standards is met during the inititial license period. The proposal does not specify fee or taxation amounts, saying only that these must be reasonable and rational and do not place undue burdens on operators.

In order to keep all tribes and card rooms on equal footing, all online poker operators would have the same launch date, January 1, 2015. This is different from Nevada, which saw Ultimate Poker roll out its product to Nevada residents and tourists on April 30 prior to its competition.

There is still much to be debated on the tribal proposal, including the exclusion of racetracks in the overall scheme. Also, the cut-off date for introducing a bill before the state legislature in the current session has long passed. Proposals by Sen. Roderick Wright and Sen. Lou Correa, SB 51 and SB 678, respectively, are currently on the table.