Indian tribes in California have reportedly joined forces and are preparing an online poker proposal that would allow their interests to be represented. 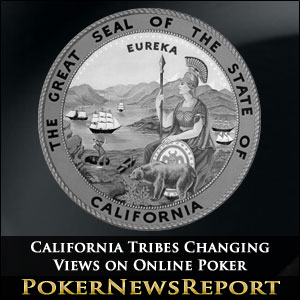 Indian tribes in California have reportedly joined forces and are preparing an online poker proposal that would allow their interests to be represented.

Many of the state’s tribes had opposed attempts to legalize online poker in the past under the belief that Internet gaming would put a dent in the revenue of their land-based casino operations. But legalization in Delaware, New Jersey and Nevada, with the latter launching online poker last week via Ultimate Poker, have prompted a number of tribal leaders to realize that its only a matter of time before online gambling regulations become widespread in individual states throughout the country, including California.

At a recent online gaming conference organized by Capitol Weekly, Chairman Mark Macarro of the Pechanga Band of Luiseno Indians told The Press-Enterprise that tribes are ready to begin working with state legislators in enacting online poker legislation. Macarro added that the previous stance held by a number of tribes who feared that online poker would undercut their profit margins is evolving.

Certain Golden State tribes have always been in favor of online poker regulations and had banded together in the past in an effort to effectuate legislative change, such as the San Manuel Band and Morongo Band of Mission Indians. Both of those groups belonged to the now defunct California Online Poker Association (COPA). Made up of a collection of 60 card rooms and Indian tribes, COPA had attempted to promote online poker legislation to ensure that its members received their share of the anticipated revenue.

COPA elected to dissolve last year after the poker-only Senate Bill 1463, sponsored by Senators Rod Wright and Darrell Steinberg, failed to gather enough support. Despite a few years of lobbying legislators to regulate Internet poker that included hundreds of hours of negotiations and public hearings, not one single vote has been taken by the state legislature.

Sen. Wright is trying again with a new bill this year. Wright’s SB 51 may conflict with the measure being drafted by the tribes, as Wright’s proposal calls for the inclusion of the state’s horse racing interests. COPA sought to exclude racetracks from participating in the state’s online poker scheme. It is not yet known if the latest native tribe proposal will continue in that vein.

With the nation’s largest population and the potential for a huge online poker market, it is encouraging that California tribes continue discussions in an effort to find common ground to legalize online poker. A lobbyist for the Agua Caliente tribe, Barry Brokaw, said that a number of tribes have made strides toward a new Internet poker proposal and that something may develop pretty soon.