California tribes who have long been at odds over the merits of online poker have reached agreement on legislation and have released the proposal to lawmakers. 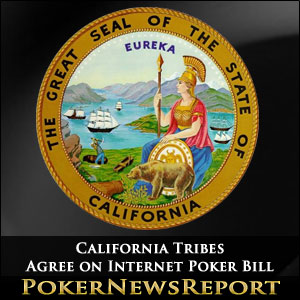 California tribes who have long been at odds over the merits of online poker have reached agreement on legislation and have released the proposal to lawmakers.

A total of 13 tribes have signed off on the measure in a show of unity that had been lacking in recent years. However, not included in the new proposal are the Morongo Band of Mission Indians, who have their own working agreement with PokerStars and three of the state’s largest card rooms.

The online poker bill does include bad actor language that would keep out gaming companies who accepted U.S. customers after the UIGEA was enacted in 2006. PokerStars is one of those companies, as the industry giant catered to Americans until Black Friday in 2011.

Although it is encouraging that a majority of the tribes have finally been able to find common ground, it is also a bit disheartening that the powerful Morongo tribe is not part of the coalition. Approval of online poker regulations in the state may continue to be hindered as Morongo has vowed to fight any efforts that will exclude PokerStars from participating.

In offering their latest proposal to lawmakers, the coalition of 13 tribes penned a letter to Assemblyman Reginald Jones-Sawyer and Sen. Lou Correa, the supporters of two separate Internet poker bills currently pending before the state legislature. The tribes admitted in the letter that the path to finding common ground has been an arduous one, but that it is now time to harness rather than cede the technology of the future.

The Morongo tribe issued a statement after perusing the measure released by the 13-member strong coalition, promising that the proposal will be vigorously opposed by our coalition, online poker players and many others, the L.A. Times reported. Language in the bill does permit those parties labeled as bad actors to file an appeal.

Also included in the specifics of the proposed legislation are license fees for poker site operators set at $5 million that run for 10 years, a 5% tax rate on revenue, a stringent player verification process designed to weed out minors and those who may be residing beyond California borders, and problem gambling initiatives that direct players who may lack control on wagering to seek help.

The tribal proposal is intrastate only and poker only, excludes racetracks from participating, allows two poker sites for each licensee, and makes it against the law for those in California to patronize online poker sites that are unregulated. There would be no first to market advantage, as all licensees would have the opportunity to launch simultaneously.

The coalition supporting the online poker bill includes the Pechanga Band of Luiseño Indians, San Manuel Band of Mission Indians, United Auburn Indian Community, Agua Caliente Band of Mission Indians, and the Rincon Band of Luiseño Indians. While opposition from the Morongo tribe is virtually assured, additional opposition is likely to come from Sheldon Adelson and his Coalition to Stop Internet Gambling.