The California State Assembly’s Committee on Governmental Organization will hold an informal hearing on online poker this Wednesday. 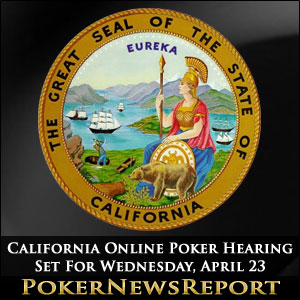 The California State Assembly’s Committee on Governmental Organization will hold an informal hearing on online poker this Wednesday.

The subject of the hearing is “Public Policy and Fiscal Implications of Authorizing Intrastate Internet Poker in California” and the matter is set to get underway at 1:00 p.m. on April 23. Two bills are currently pending before the state legislature and this mid-week sit-down may go a long way in determining if California will advance online poker regulations in 2014.

A number of topics are likely to be touched on at the hearing, one of which is the recent controversy surrounding PokerStars and their desire to join forces with the Morongo Band of Mission Indians and several state card rooms. As many are aware, a dozen other tribes voiced their opposition to PokerStars being part of the state’s online poker regime by issuing a “Joint Tribal Statement on iPoker Bad Actors” last month.

While the meeting’s full agenda has yet to be released, the hearing’s subject lends one to believe that committee members will be tossing numbers around regarding revenue dollars that could be had should one of the two active bills actually be approved. Those bills are AB 2291 and SB 1366.

AB 2291 was introduced by Assemblyman Reginald Jones-Sawyer (D-Los Angeles) and has the backing of the Pechanga Band of Luiseño Indians and the Agua Caliente Band of Cahuila Indians. Jones-Sawyer is one of 19 members on the Governmental Organization Committee that is chaired by Isadore Hall, III.

The other bill, SB 1366, is sponsored by Senator Lou Correa (D-Santa Ana) with the blessing of both the United Auburn Indian Community and the San Manuel Band of Serrano Mission Indians. Correa heads the Senate Governmental Organization Committee, taking over that role after the voter fraud conviction of former chairman Sen. Rod Wright.

As the largest state in the nation, all eyes are on California with regard to the possibility of the Golden State being the fourth to enact online poker regulations. Even though both legislative proposals on the table are restricted to players within the state, other states may be more inclined to also pass online gambling regulations if California does so.

However, there are a number of issues that need to be ironed out before such a bill would pass. Perhaps the upcoming hearing can begin the process toward finding common ground and heading in the right direction with regard to approving an intrastate online poker bill.