One of the sponsor’s of a proposal to legalize online poker in California yanked the legislation from a Senate committee agenda just prior to a scheduled vote. 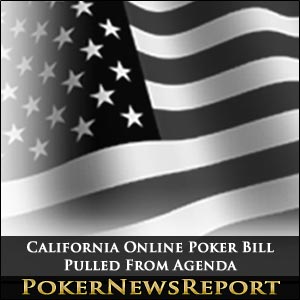 One of the sponsor’s of a proposal to legalize online poker in California yanked the legislation from a Senate committee agenda just prior to a scheduled vote on the measure by committee members.

Sen. Rod Wright (D-Inglewood) told a crowded hearing room at the Senate Governmental Organization Committee that he removed the bill from the agenda, causing a mass exodus of spectators to flee the hearing. Observers believe that Wright decided against going ahead with the proposal because it would not have garnered enough votes to pass through the Senate committee, of which he is the chairman.

The bill was recently amended by Wright and co-sponsor Sen. Darrell Steinberg (D-Sacremento) to appease tribal gaming interests and card rooms that had objected to several provisions in the bill. However, the in-fighting among the Golden State’s gambling interests is quite intense, including the state’s many tribal factions who are divided on whether or not the bill will be beneficial to Indian casinos. Some tribes are opposed to the bill altogether, believing that it will hurt their casino revenue.

Most Tribes that are in favor of the measure are against horse racing tracks obtaining licenses, as well as a provision in the bill which allows for entities outside of the state to be able to partner up with a California business that obtains a license.

If you limit who can participate, you are limiting the number of dollars that come in to the state, Wright told the L.A. Times. Underlying all of this is you still have a public interest to uphold.

Wright further said that negotiations with the state’s gambling interests will continue in an effort to reach some sort of compromise on the issue, but the legislative session concludes on August 31 and successfully passing the online poker legislation prior to that time is less than 50-50.