With several online poker bills on the table in California, the state’s cardrooms have joined forces in order to be properly recognized. 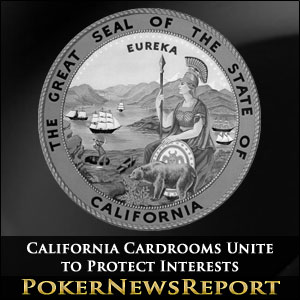 With several online poker bills on the table in California, the state’s cardrooms have joined forces in order to be properly recognized.

Communities for California Cardrooms is comprised of the Golden State’s 88 cardrooms and was formed to protect the group’s economic interests. Many of the poker rooms in the newly-formed organization were previously affiliated with the now-defunct California Online Poker Association (COPA).

COPA was a united effort of collaboration between many of the state’s Indian tribes and cardrooms. The group disbanded last year over frustration from the lack of progress in online poker legislation. Also into the muck went the organization’s free-play poker website, CalShark, which they hoped to transition to real-money wagering once regulations went into effect.

According to the Sacramento Bee, the new cardroom coalition has hired two lobbying firms based in Sacramento to represent and push for their interests. It is rumored that those interests may include opposition to the language in at least one of the online poker proposals currently before state legislators.

Although that rumor has not been confirmed, it has been made clear that Communities for California Cardrooms believe that they are a key factor in the state’s economy and want their interests protected. Although the group has not yet taken a stance for or against online poker, a spokesman indicated that some competitive issues exist in the proposed legislation that the cardrooms must further analyze.

The cardrooms’ lobbying efforts will reportedly center around being well-represented and included in all facets of the state’s gaming endeavors. Whether or not that will include online poker remains to be seen.

Online poker in California has been put on the back burner as state legislators are currently more concerned with budgetary issues, immigration, and the rights of same-sex couples to legally wed. However, Internet poker will likely take center stage at some point, and the cardrooms have aligned forces to have their voices heard when that time comes.