The sixth player from Canada to win a bracelet at this year’s WSOP, Calen McNeil outlasts Can Kim Hua in an epic heads-up duel. 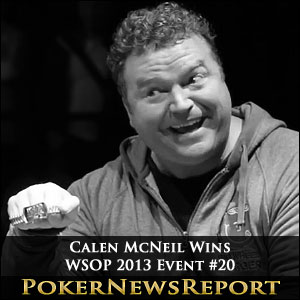 The sixth player from Canada to win a bracelet at this year’s WSOP, Calen McNeil outlasts Can Kim Hua in an epic heads-up duel.

Loud, brash, emotional – these are the words one would use to describe Canadian Calen McNeil. But for all of his Hellmuth-esque whining about coolers and bad beats, the seasoned amateur was able to pull off an impressive victory against a relentless opponent in this year’s $1,500 Omaha Hi-Low event. McNeil’s victory was good for $277,274 and marked the sixth time this year that a Canadian has won a WSOP bracelet.

But the real story here is the epic two day heads-up battle between McNeil and Californian pro Can Kim Hua. At the start of heads-up play, Hua possessed a nearly 3:1 chip lead, which he extended shortly into the match. But from there, McNeil came back with fervor, winning a massive pot good for the chip lead. The two went back and forth for several more hours until Hua decided to bluff a sizable portion of his stack on the final hand of the night.

Play resumed Thursday afternoon, and this time it was Hua roaring back to regain the chip lead. McNeil would then start level 33 by winning a flurry of smaller pots, whittling Hua down until the final hand of the match. In that hand, Hua bet a K-8-4 rainbow flop, McNeil raised and Hua call. The turn brought the 10 of clubs and the remaining chips went into the middle. In what amounts to a cooler, McNeil showed top set, and Hua top two pair with an open ended straight redraw. With no low possible, Hua needed to catch a Jack or a six to double up. McNeil, not realizing Hua had outs began celebrating prematurely. Thankfully for him, the river was a brick and McNeil was declared the winner. It was his first WSOP bracelet.

McNeil, who talked, yelled and wallowed throughout the entire match, certainly wore his emotions on his sleeve. The restaurant owner from British Columbia had never won more than $35k in a single tournament before, and was clearly intoxicated by the bright lights of Las Vegas and the WSOP.