Cake Poker, a longtime advocate against poker tracking software , has switched gears and announced that heads-up displays (HUDs) will now be permitted on its site. 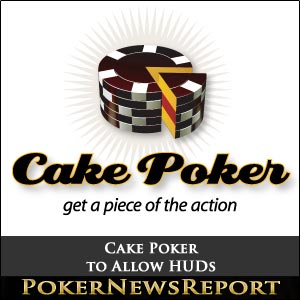 Cake Poker, a longtime advocate against poker tracking software , has switched gears and announced that heads-up displays (HUDs) will now be permitted on its site.

Last July, Poker Tracker, one of the premier companies providing tracking software, entered into an agreement with Cake Poker designed to “test the viability” of permitting HUDs on the Cake network. After completion of the viability testing, Cake has decided to allow HUDs such as Hold’em Manager and Poker Tracker to be used on the poker site.

“From November 9 we allow players to use third-party software that provide HUD data such as Poker Tracker and Hold`em Manager,” said Anton Zhilin, Adamevepoker’s senior affiliate and project manager, one of the poker sites on the Cake Network.

A HUD is best described as an internet poker tool that displays information directly onto a poker table. The information consists of statistics tabulated by an analysis and tracking software database, as well as probability information on the various hands the HUD-using poker player is involved in. The information provided by a HUD is designed to give the player better insight on his or her opponents and is intended to allow the player to make the proper or best decisions according to probabilities of winning and tendencies and weaknesses of the other players, thereby increasing profitability. It is difficult for a multi-tabling player to focus properly when his attention is divided among the many different tables being played. In using information provided by HUDs, a player can read the situation better and make the correct plays.

The use of poker tracking software has been somewhat controversial as of late. Many poker sites are leaning toward attempting to attract the more casual poker players to their poker rooms, as opposed to courting the pros who are using HUDs to gain an edge over the less-knowledgeable players. Bodog Poker is one of the sites adamant about blocking third-party software usage on its site.

“We are moving to a completely new software in a couple of months, and that software will block all player tracker software,” said Jonas Odman, vice president of Bodog Network, in September. “This will create a more level playing field and is a huge step forward for Bodog’s Recreational Poker Model.”

The move by Cake Poker to allow HUDs marks a significant policy change, as Cake had previously been known in the industry for strictly opposing the use of poker tracking software on its network. However, Cake does remain one of the few poker sites that allows players to change their screen name or user name to confound opponents and make player tracking more difficult.

“Players can still change their nicknames every seven days to combat any form of tracking if they wish,” Zhilin said.