Caesars was given the nod by New Jersey gaming officials to operate online gambling sites just in time for today’s scheduled soft launch. 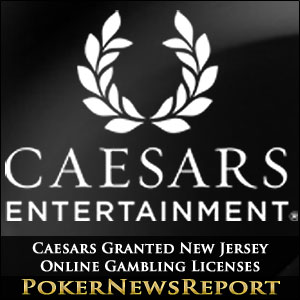 Caesars was given the nod by New Jersey gaming officials to operate online gambling sites just in time for today’s scheduled soft launch.

Ballys Atlantic City and Caesars Atlantic City, two of the four Caesars-owned casinos in New Jersey, met the requirements of the Casino Control Commission and the Division of Gaming Enforcement (DGE) just under the wire. The Showboat and Harrah’s Resort, Caesars’ other two Atlantic City casinos, submitted no applications for consideration, [geolink href=”http://www.pokersites.us/caesars-approved-online-gambling-new-jersey/” target=”_blank”]Pokersites.us reported[/geolink].

The approved casinos now total seven, as the Trump Taj Mahal, Trump Plaza, Tropicana, Golden Nugget and Borgata were green-lighted previously. Not participating in the state’s online gaming scheme will be the Atlantic Club and Revel, both of whom have been involved with bankruptcy proceedings this year. The most recent court action indicates that the Atlantic Club will be up for auction next spring.

Also not on the docket to take part in today’s soft launch that gets underway at 6:00 p.m. is the Resorts Casino. That gaming establishment’s much-publicized partnership agreement with PokerStars continues to be investigated by the DGE.

PokerStars’ head of communications, Eric Hollreiser, conceded that the company will not be involved in the first wave of online gambling sites that launch in New Jersey. But he has hopes for future involvement and is complying with the requests of gaming officials as they continue to review PokerStars’ suitablity.

A two-hour hearing was conducted by the control commission before Caesars was approved. CEO Mitch Garber was on the hot seat due to his past employment with both bwin.party and the payment processing firm of Neteller. Both companies were sanctioned by U.S. authorities after the Bush administration approved the UIGEA.

But Garber’s integrity won out, as he successfully proved that his intentions during his tenure with either company were never to deceive. The control commission found favor with his answers, which led the DGE to rubber stamp the approval of both applications for licensing submitted by Caesars-owned properties in Atlantic City.

The soft launch will be followed by a real-money full launch open to all New Jersey resident and tourists on Nov. 26. That is, of course, provided that gaming regulators are satisfied with the results of the invite-only test period. Seven New Jersey casinos are now allowed to offer regulated online gaming, which marks another milestone in the history of Internet gambling in the U.S.