Caesars Cup to be Reprised at WSOPE

Caesars Cup to be Reprised at WSOPE 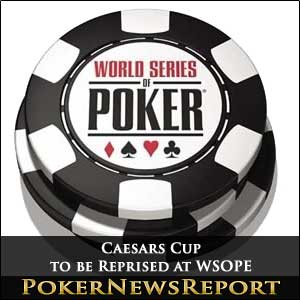 The Caesars Cup – a poker event styled on golf´s Ryder Cup – is to be reprised during the WSOPE this year.

Originally played in 2009, when Europe thrashed the Americas 4 games to 1, the format of the event may be a little unusual to many. Teams of two take it in turns to make betting decisions on each turn of the card in a two-way heads up. It makes for great television but has never taken off as an event in its own right (hence why this is only the second time it is being played).

The event this year takes place on Friday October 21st – the day after the conclusion of the WSOPE Main Event – and organisers have selected Phil Hellmuth and Bertrand “ElKY” Grospellier to be captains of the respective teams. Each captain has to pick four players to support him through the five scheduled events and while Phil Hellmuth has been publicly trying to woo Phil Ivey, Daniel Negreanu, Eric Seidel, Jason Mercier, Tom Dwan and Ben Lamb (that makes a team of seven Phil!), ElKY has been keeping his cards close to his chest.

That was the expert summation of ecstatic Team European captain Annette Obrestad after Europe beat the USA in 2009. With a team comprising many of youth as opposed to experience, Annette said “I would say that we outplayed them for the most part. We didn’t make that many mistakes at all and we didn’t get that lucky.” Daniel “D-Negs” Negreanu – captain of Team USA had a different opinion. “Two things,” he said. “First of all, in all the key situations, whether it was an ace versus an ace or whatever, they won every one of those. A lot of the key hands we just got unlucky in. Secondly, the specific format really didn’t allow players, like Phil Ivey for example, to exhibit his strengths. It was all-in poker.”

Effectively the captain of Team USA was admitting that he picked the wrong players for the game!