While this whole situation has left many players with nowhere to go in order to play online poker, there could be some good news coming; especially if the final decision came from Caesars’ CEO Gary Loveman. 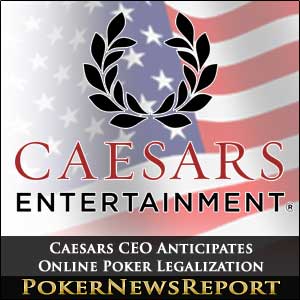 After Black Friday back on April 15th, 2011, a lot of online poker players in the United States were left with almost nowhere to play.

Big time poker sites such as Full Tilt Poker, PokerStars, and Absolute Poker were indicted by the United States Department of Justice (DOJ), which locked all US players out and left all of their money locked up online.

For players on PokerStars, most of them have been fortunate enough to get their money back off of the site, but sites like Full Tilt and Absolute have left players with their money stranded.

There could be some good news coming, especially if the final decision came from Caesars’ CEO Gary Loveman.

Gary Loveman took part in a video interview with Matt Garrahan of the Financial Times. Loveman said quite a few interesting things, but the main one was that he not only hoped that online poker would be legalized in the United States, he actually thought it was just a matter of time before it was. One of his more interesting points was that the United States has made it legal for Americans to play online poker at the age of 21, but that it was illegal for companies to actually run [geolink href=”https://www.pokernewsreport.com/online-poker-rooms”]online poker sites[/geolink]. According to Loveman, this is where companies like Caesars Entertainment comes in and also explains recent discussions between [geolink href=”https://www.pokernewsreport.com/888-poker”]888 Poker[/geolink] and Caesars.

The talks have been that if the United States was to allow online poker, that it would be strictly regulated and watched over, and could even be voted against in certain states. Possibly Loveman’s most convincing point was the fact that this would create thousands of jobs throughout the United States to work for the actual online poker companies themselves.

This is where he says he really began to a feel that it is “more of a sense of inevitability” that online poker will soon be legalized in the United States. Caesars Entertainment could realistically be a real potential suitor for this situation, as they are the largest gaming company in the entire world. Their brand includes big names such as Harrah’s, Caesars, Bally’s, and the Horseshoe. They also include places such as the Rio All-Suite Hotel and Casino, Paris Las Vegas, Planet Hollywood in Las Vegas, and places such as the London Clubs Casinos which are located in both Europe and Egypt currently.