Caesars Interactive Entertainment has applied for an online gambling license in New Jersey and its approval is expected to be a mere formality. 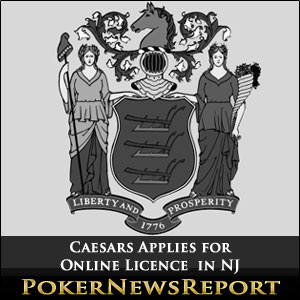 Caesars Interactive Entertainment has applied for an online gambling license in New Jersey and its approval is expected to be a mere formality.

The gaming company, well-known for operating the World Series of Poker (WSOP) brand, runs four Atlantic City casinos, so it comes as no surprise that Caesars aims to be a huge player in the newly-regulated New Jersey market. Bally’s, Harrah’s Resort, the Showboat, and its namesake Caesars are all firmly entrenched on the Atlantic City boardwalk and make up one-third of the Garden State’s brick and mortar casino offerings.

Online gambling legislation was signed into law by Governor Chris Christie in February and New Jersey gaming officials have been working tirelessly in preparing to launch Internet wagering sometime this year. Nevada and Delaware are also expected to offer legalized online gaming in 2013 and New Jersey is hoping to keep pace.

Caesars Interactive is the online division of parent company Caesars Entertainment. It currently operates online poker and casino games in the UK market and intends on bringing those same offerings to New Jersey. The company’s online arm is led by Mitch Garber, who formerly headed Partygaming prior to its merger with Bwin. Garber also had past affiliations with Neteller, which likely played a role in a recent agreement between the two companies for Neteller to provide online payment processing functions to Caesars.

It is unclear at this time if Caesars will be competing against PokerStars in New Jersey. The world’s leading poker site has made a bid to acquire the Atlantic Club casino in hopes of entering the U.S. market. A decision on whether the state’s Casino Control Commission will approve a casino license to PokerStars is not expected until August.

The American Gaming Association has filed a petition strongly opposing PokerStars as a suitable licensee in New Jersey based on their continued service to the U.S. market following passage of the UIGEA in 2006. State gaming officials must decide if the AGA’s claims will be considered in regards to their ruling on PokerStars’ suitability.

The AGA’s continued involvement in the matter will be overseen by a new president and CEO. Geoff Freeman will take over the post effective July 1, 2013. Frank Fahrenkopf, Jr. is stepping down from the position after heading the AGA since its inception over 17 years ago. Freeman is a highly-respected executive who spent the last seven years as COO of the U.S. Travel Association.

Caesars is headquartered in Nevada and is making strides toward being the first company to launch online poker in the Silver State. Its website, WSOP.com, recently began accepting player signups to begin beta testing on its software. A real-money launch is inching closer, though an exact date has not yet been established.