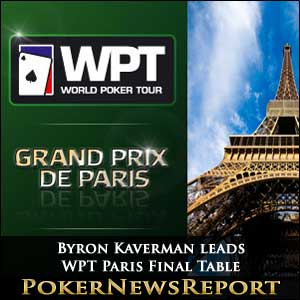 Eighteen players took their seats on Day 4 of the World Poker Tour Grand Prix de Paris – the penultimate day of an intriguing Main Event which has been notable for the speed at which top players wanted to get rid of their chips and go visit the sites. Scheduled to play down to a short-handed final table of six, there was no hanging around today either – with a steady two players an hour departing once the cards were in the air.

The day started with just under an hour left of level 18 and the blinds on 3,000/6,000 with a 1,000 ante. Ahmed Debabeche was the first player to depart, shoving his pocket sixes and 51,000 in against Jean Noel Thorel whose 10♥ Q♠ caught on the flop to send Debabeche out of the game. Guillaume Darcourt, who started the day with half a million chips was next to depart in a two-handed double whammy. First he ran K♦ K♠ into the A♣ A♥ of Andras Kovacs and was then out-flushed with J♦ 6♦ against the better (K♦ 2♦) diamonds of Hugo Lamaire.

It was goodnight lovers for Francke Pepe soon after. The Day 2 chip leader got all his chips into the middle after flopping a pair of Kings with a 10 kicker, but Mikko Sundell went with him and hit a set of fives on the turn to send Francke packing. Stephane Benadiba had been nursing his short stack through most of the afternoon, but found it too tempting to keep quiet about his A♣ J♦ on a flop of 9♣ 7♣ 6♣ and shoved his final chips in against Lebanese Dori Yacoub, who had already made the flush with K♣ J♣. Jean Noel Thorel became the fifth French casualty of the day when his K♦ 10♥ failed to connect against Dimitry Stelmak´s Q♠ Q♥.

The Rest of the World Begins to Wobble

American Joe Cassidy who was next to depart – moving his stack of 126,000 chips in with J♦ 9♦ and finding Mikko Sundell´s K♣ 9♠ there to meet him. The 9♣ on the turn provided no help for the Californian, who will be disappointed he failed to run deeper despite collecting €44,445 for his efforts. The same reward awaited Andras Kovacs, whose pocket Jacks were bested by Byron Kaverman’s flopped pair of tens, but the French demise accelerated thereafter – with Alexandre Brivot, Nesrine Kourdourli and Alain Goldberg all eliminated within an hour.

Down to eight players – and with just two eliminations required before the final table was set – the pace of the game slowed dramatically. The Finn, Mikko Sundell, was bullying Russian Dimitry Stelmak after taking 145,000 chips from him in a J♥ J♦ v K♦ 10♦ hand in which the Jacks held, and then forcing the Russian to give up a big pot with some aggressive post-flop betting. Sundell had also made a substantial hole in Dori Yacoub´s stack when out-flushing him with K♣ 7♣ v Q♣ J♣; however it was the Lebanese player who was to benefit from the Russian´s ultimate downfall – Yacoub collecting with A♥ K♠ v Stelmak´s A♣ Q♥ and sending the former maths student to the rail.

Lemaire Rises at the Expense of Sundell

With blinds at 8,000/16,000, Hugo Lemaire took advantage of players tightening up to chip up considerably – specifically against chip leader Mikko Sundell. Having taken 200,000 from the Finn after flopping a pair of Aces, Lemaire out-bet Sundell on a flop of K♠ A♣ K♥ for another 80,000, took a further 200,000 chip pot when his Aces held against Sundell´s pocket tens and then hit quad tens to add another 750,000 of the Finns chips to his stack.

Lemaire´s rise was completed in the very next hand as Dori Yacoub became his final victim of the day. Pushing his last 200,000 chips in on a flop of 4♣ 3♣ K♣, Yacoub was behind with Q♦ J♣ against Lemaire´s 5♣ 5♠, but with plenty of outs. Unfortunately for the Lebanese poker player the 9♦ and 7♦} provided no assistance, and his elimination provided us with the six players who will grace the final table of the World Poker Tour Grand prix de Paris Main Event.

Despite Lemaire´s meteoric rise through the ranks, he did not quite catch new chip leader Byron Kaverman. An intriguing battle had developed between American Kaverman and Lemaire and throughout the day they had locked horns on several occasions. But after Kaverman had been responsible for the back-to-back eliminations of Alexandre Brivot and Nesine Kourdourli, things seemed to get personal. It will be an interesting final table for sure!