The online poker market in New Jersey can shape up one of two ways, either with PokerStars and its current market dominance, or without. 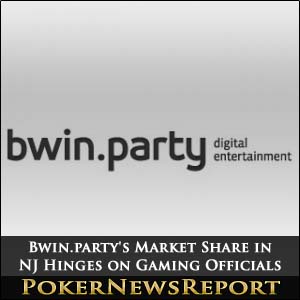 The online poker market in New Jersey can shape up one of two ways, either with PokerStars and its current market dominance, or without.

Should the world’s top poker site not be allowed to acquire an Atlantic City casino, that would permit other gaming companies to establish a presence in the U.S. online poker market. Bwin.party CEO Norbert Teufelberger believes it would be a head-to-head battle for market share between Bwin and Caesars Interactive Entertainment if gaming officials decide that PokerStars is unsuitable as a casino license holder.

Teufelberger said that PokerStars is going “all-in” with their New Jersey efforts since Nevada’s bad actor clause will likely keep them out of the Silver State for five years. It is highly probable that regulations in other states will also not be favorable to PokerStars, who virtually ignored the UIGEA in 2006 and continued operating in the U.S.

Bwin.party, parent company of [geolink href=”https://www.pokernewsreport.com/partypoker”]PartyPoker[/geolink], has a meeting scheduled with New Jersey gaming regulators this week. The Gibraltar-based company signed a partnership agreement with Boyd Gaming and MGM Resorts International in 2011 in anticipation of entering the U.S. market. That day looks to be fast approaching with Nevada, Delaware and New Jersey preparing to be up and running with [geolink href=”https://www.pokernewsreport.com/online-poker-rooms”]online sites[/geolink] sometime this year. Boyd operates one casino in New Jersey, while Caesars has four.

Although Bwin.party did file for an interactive gaming license in Nevada, that was mostly done in anticipation of federal legislation. With federal lawmakers countinuously failing to support online poker regulations, Bwin.party has decided to forego Nevada licensing in the present and focus on their joint venture in New Jersey as a means to tap into the market, eGR reported.

Bwin.party also has a partnership with California’s United Auburn tribe in preparation of the Golden State one day also approving online poker regulations. However, bickering between Indian tribes, card rooms and horse racing interests has repeatedly stalled possible legislation in the country’s most populous state.

So Bwin.party will rely on its agreementwith Boyd and MGM in New Jersey, where Bwin holds a 65% share in the partnership, to 25% for MGM and Boyd’s 10%.party