In a partnership aimed at perhaps regaining position as the world’s premier online poker site, Bwin.party, which operates Party Poker, has teamed up with land-based casino companies MGM Resorts International and Boyd Gaming Corp. in preparation of offering online poker to the U.S. market if legislation is eventually enacted in the United States. 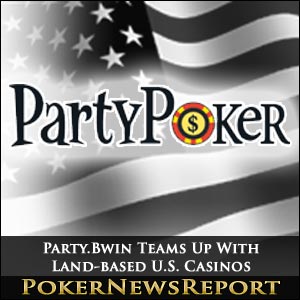 In a partnership aimed at perhaps regaining position as the world’s premier online poker site, Bwin.party, which operates Party Poker, has teamed up with land-based casino companies MGM Resorts International and Boyd Gaming Corp. in preparation of offering online poker to the U.S. market if legislation is eventually enacted in the United States.

[geolink href=”https://www.pokernewsreport.com/partypoker”]Party Poker[/geolink] withdrew from the U.S. online poker market in 2006 due to passage of the Unlawful Internet Gambling Enforcement Act (UIGEA), which made it illegal for banks and financial institutions to process payments for players wishing to make deposits at poker sites. Jim Ryan, co-CEO of Bwin.party, said that the company is once again ready to offer online poker to U.S. players.

“We have been putting in place the foundation, if you will, to re-enter the market,” Ryan said.

The U.S. casino companies and Bwin.party, which is based in Gibraltar, said that if U.S. poker legislation is passed, all three of the companies would grab a stake in new online poker entities that would provide internet gaming under the Party Poker name and other brand names. The agreement will allow the companies to build a big enough player pool to make substantial profits in the industry, Ryan added.

Party Poker left the U.S. market in 2006 as the world’s largest poker site with half of the worldwide market. PokerStars, Full Tilt Poker and Absolute Poker elected to remain in the U.S. market and flourished for nearly five years until April of this year when the Department of Justice (DoJ) filed legal charges against the trio, accusing the sites of fraud and money laundering for continuing to process transactions from players through bogus companies in an effort to circumvent the UIGEA statute.

Ryan said that he felt Party Poker was correct in leaving the U.S. market, although it was difficult to watch the other sites overtake Party Poker in traffic rankings and profits. “Did we sit back and watch in envy and knowing full well that we (had) had 50 percent of the market at that point? Perhaps, but we never questioned our decision,” he said.

In addition to creating a new entity that will divide ownership by giving Bwin.party 65 percent, MGM Resorts International 25 percent and Boyd Gaming holding a ten percent share, Boyd and MGM  will use the software of Bwin.party to operate online poker rooms featuring brand names of their own.

Boyd CEO Keith Smith said that it’s vital for poker site operators to act quickly when regulations are in place to take advantage of a U.S. online poker market that generates an estimated $6 billion in annual revenue.

“We want our investors to know we’ve been aggressive in positioning the company,” Smith said.

CEO Jim Murren of MGM Resorts said that strict internet poker laws are needed because the companies that currently offer online poker to Americans have damaged the reputation of the gambling industry.

“Whenever there’s a problem anywhere, it reflects poorly on the gaming industry, of which we are a major player,” Murren said. “The federal government needs to address this. It cannot wish it away.”

Murren added that with so much money at stake in the online poker industry, it cannot continue to remain ungoverned without  regulations. “We know there are millions of U.S. citizens risking billions of dollars at unregulated, illegal sites and there is no way to enforce good behavior, and that has to change.”

MGM Resorts has a stake in all or part of 18 casinos in Michigan, Mississippi, Illinois and Nevada. Boyd operates 17 casinos in New Jersey, Nevada, Mississippi, Indiana, Illinois and Louisiana. Bwin.party, which owns the popular World Poker Tour, holds licenses in Italy and France and is seeking online gaming licenses in Denmark and Spain, Ryan said.