Once bwin.party’s NJ Internet gambling application is approved by the DGE, Ruth and James DeLeon will divest their 117 million shares of company stock. 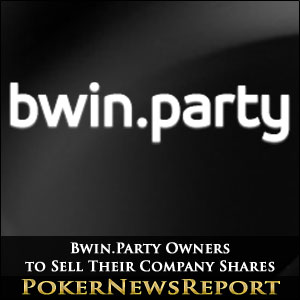 Once bwin.party’s NJ Internet gambling application is approved by the DGE, Ruth and James DeLeon will divest their 117 million shares of company stock.

With the imminent approval of bwin.party digital entertainment’s online gambling application only a few weeks away, company owners Ruth Parasol DeLeon and James Russell DeLeon are electing to divest their stock in the company. Both parties currently hold a whopping 58.5 million shares, equating to 7.16 percent ownership each. Their departure will lead to a major stirrup for bwin.party, the owners of PartyPoker and the World Poker Tour.

According to NJ state legislation, vested shareholders like the DeLeons are required to submit separate licensing applications, or opt to distribute their shares of stock. The DeLeons opted for the latter.

Ruth, who founded PartyGaming in 1997, and James are in the middle of a divorce. It is not known if their marital struggles played a factor in their decision to place their shares in divestiture trusts. Their nearly 117 million combined shares will be distributed over a three year period.

Bwin.party first applied for a gaming license in New Jersey just days before the deadline application of July 31. Although its partner, the Borgata, was the first Atlantic City approved for a gaming permit, bwin.party has yet to hear back from the DGE. Neither has every other online gaming provider that has applied for licensure, 37 in total. Since being approved, four other AC casinos have joined the Borgata: Trump Taj Mahal, Trump Plaza, Tropicana and the Golden Nugget.

PartyPoker has been decidedly absent from the US’s poker scene since the UIGEA was passed in 2006. Unlike other online poker providers like Full Tilt Poker and PokerStars, PartyPoker elected to drop out of US markets almost immediately. Three years later, it paid $105 million worth of damages to the US Department of Justice, primarily for offering internet gambling in the US. In exchange, the company was not prosecuted.

Having wiped the slate clean, bwin.party is eager and ready to reenter the US marketplace, first in New Jersey, and hopefully in other locations throughout the states. The company has already received a license in Nevada, and is poised to provide the online gaming platform for MGM Resort’s International.

Bwin.party is currently listed on the London Stock Exchange. After merging with PartyGaming in 2011, the newly formed company became the world’s largest publicly traded iGaming company in the world.