Joint BwinParty CEO Norbert Teufelberger has been arrested by Belgian police after giving a speech at EGBA´s Responsible Gaming Day conference in Brussels. 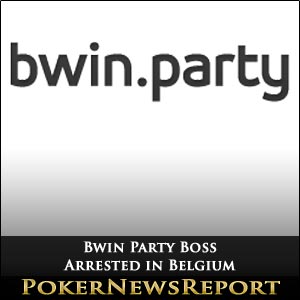 Joint BwinParty CEO Norbert Teufelberger has been arrested by Belgian police after giving a speech at EGBA´s Responsible Gaming Day conference in Brussels.

Few details are yet available about the reasons for the arrest, however it is understood that Norbert Teufelberger´s arrest was made in front of a number of high-profile industry professionals shortly after completing his address to the assembly in his role as chairman of the Supervisory Board of the European Gaming and Betting Association.

Also known to be in attendance at the EGBA conference were MEPs Jürgen Creutzmann, Christel Schaldemose and Christofer Fjellner along with the chairman of the French Gaming Authority ARJEL Jean-François Vilotte, Birgitte Sand from the Danish Gambling Authority and Reuben Portanier – CEO of the Malta Gaming and Lotteries Authority.

Trouble has been brewing between Bwin:Party and the Belgian authorities for some time – last year the company were fined €75,000 after it was found that bwin.be was operating in contravention of Belgian law and bwin.be was black-listed by Belgium Gaming Commission. Bwin:Party contested the judgement, but their claim was dismissed by the Belgian Court of First Instance earlier this year.

Bwin:Party responded by switching their Belgian clients – who actually face getting a fine themselves in they are caught playing poker on an unlicensed site – to www2.bwin.com. The site was subsequently blacklisted by Belgian authorities in July this year.

Teufelberger has been in trouble with the gaming authorities before. In 2006, Teufelberger and co-Bwin CEO at the time Manfred Bodner were arrested in Monte Carlo and charged with infringement of French gaming legislation. At the time, they got away with a financial slap on the wrists – but on this occasion, it would appear that Belgian authorities are making a public show of detaining Teufelberger, and the penalties could be far more significant.

Keep up to date with the latest on this story on PokerNewsReport.