Bwin.Party Aim to be Nº1 Online Poker Site in USA

Bwin.Party – the largest publicly traded online poker company – is attempting to woo investors in the USA with the carrot that they could once again become the biggest online poker site in the world. 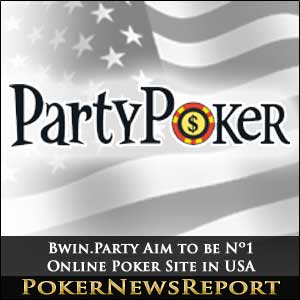 Bwin.Party – the largest publicly traded online poker company – is attempting to woo investors in the USA with the carrot that they could once again become the biggest online poker site in the world.

Prior to 2006, [geolink href=”https://www.pokernewsreport.com/partypoker”]Party Poker[/geolink] was a much larger company than it is today, and bossed the likes of PokerStars and Full Tilt Poker in terms of the number of online poker players and the size of the their multi-million dollar online poker tournaments.

Since Party Poker´s withdrawal from the USA online poker market due to the introduction of the Unlawful Internet Gaming Enforcement Act, they have had to look on from across the Atlantic as Poker Stars and Full Tilt Poker profited from an industry estimated to be worth $16 billion in the States alone. Furthermore, the payment of $105 million to the US Attorney in return for a non-prosecution agreement created a big hole in the company´s finances and, to many industry observers, it seemed as if Party Poker had just given business away.

Party Poker and Bwin Join Forces against the Big Two

A merger between Party Poker and Bwin in 2010 failed to attract the market share the new joint venture had been hoping for, and shares in the company fell 50% in value over the first year of operation. PokerStars and Full Tilt Poker continued to dominate online poker – even after Black Friday – and it was not until Full Tilt Poker had their operating licence revoked by the Alderney Gambling Control Commission in June that an upward turn in the Bwin.Party fortunes was noticed.

Now, as talks continue towards the regulation of online poker in the States, Bwin.Party´s Co-Chief Executive Office, Jim Ryan, is looking for a partner in the States through which the Bwin.Party brand can again be number one. “It is not a question of “if”, but when” Ryan told the New York Times in an interview last week, and although he accepts that new laws may provide the land-based casinos with the first option to launch online poker again in the States, is positive about the future.

Bwin.Party Currently “Down the Food Chain”

“We have to be realistic about where we sit in the food chain” claimed Ryan on his recent presentation to potential US investors, acknowledging that “if the U.S. regulated [online poker] it would be unlikely that we would secure a license directly”. Ryan cemented his argument that Bwin.Party was a sound investment by using a chart which demonstrated the current level of brand awareness for [geolink href=”https://www.pokernewsreport.com/us-poker-sites”]poker sites in the US[/geolink].

With lines drawn through PokerStars and Full Tilt Poker, Party Poker was now at the top of the list despite having withdrawn from the US market five years ago. With the likelihood that neither of the “big two” will be granted a Stateside operating license in the foreseeable future, there is an obvious attraction for investors to get aboard the Bwin.Party train before it leaves the station. As an added bonus for potential investors, Bwin.Party also owns the World Poker Tour – one of the most recognised names in international live poker tournaments.

Ready for Federal or State Regulation

Ryan revealed that he was in advanced negotiations with two US companies to create a portal for Bwin.Party to get back into the US online poker market. “We have to be ready for both federal or state,” he said. “It feels good to have American taxpaying companies finally driving this.” The result could indeed see a flock of orphaned US Poker players to a trusted, publicly listed online poker company, which might again become the Nº1 online poker site in the USA.