Noah Boeken won one of the best Master Classics of Poker Main Events seen in recent years; coming from behind to beat Simon Persson in an extended heads-up. 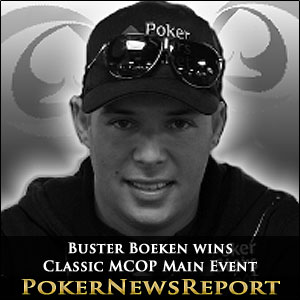 Noah Boeken won one of the best Master Classics of Poker Main Events seen in recent years; coming from behind to beat Simon Persson in an extended heads-up.

The conclusion to the 2013 Master Classics of Poker (MCOP) Main Event was played this weekend at the Holland Casino in Amsterdam, after a second day was added to the final table to account for the long passages of play between eliminations on Friday.

Eventually, Noah Boeken and Simon Persson sat down to slug out the title of Master Classics of Poker Main Event Champion on Saturday afternoon; with Boeken delighting his partisan rail by overturning a substantial chip deficit to claim victory and the €306,821 first prize.

However, a lot of poker happened between Day 3 ending with Clyde Terlaan in the chip lead and Noah Boeken collecting his winner´s cheque:

The Last Post for Zeus as Luuk Lucks into Lead

Although play had been halted at the end of Day 3 with ten players remaining, the “official” final table of nine was not set until after Zeus Post had been eliminated in tenth place. Post was particularly upset about being bust out, after his Q♣ Q♥ looked likely to elevate him into the chip lead on the flop and Turn of 5♥ 2♣ 5♠ / K♠, but Luuk Gieles (A♥ Q♦) hit the three-outer Ace he needed on the River to send Zeus Post storming from the Lido Room and place Gieles at the top of the chip counts as the (“official”) MCOP final table was set.

With blinds starting at 10,000/20,000 (ante 3,000) when the final table began, most of the action in the first level of the final table was confined to squeezes being put on the short stacks by the players at the top of the leaderboard. Simon Persson gave Noah Boeken´s Q♣ Q♠ too little respect – and Boeken took three streets of value from the Swede – before Persson was forced out of a 800,000 chip pot on the River by Luuk Gieles to fall below 1 million chips.

However, the first player to leave the MCOP final table was the dangerous Russian player Dmitry Nemirovsky, who had seen his chip stack halved when doubling up Charlie Combes (A♠ A♥ > Q♣ Q♠), and then got the last of his chips into the middle with A♣ 5♥. Nemirovsky received a call from Noah Boeken (A♥ J♦) and, with no Five to rescue the Russian, Nemirovsky was bust from the Master Classics of Poker in ninth place.

The squeezes continued prior to the dinner break, with only Andrew Chen showing any resistance to the force shown by the big guns to double up K♣ K♥ > 10♣ 10♥ against Simon Persson. Both Rob Hollink and Johan Verhagen slipped to fewer than 10 Big Blinds, and it was Hollink who was the next player to depart, when he ran his Q♦ Q♣ into the A♣ K♣ of Luuk Gieles, and “Lucky Luuk” hit the A♥ on the flop to eliminate Hollink in eighth place.

Despite trebling up against Noah Boeken and Clyde Terlaan when his 6♣ 6♠ made a set on the flop, Johan Verhagen was also soon to be sent to the rail – although he was unfortunate to miss all his outs on the flop of 8♥ K♦ 6♦ when getting all-in with 5♦ 7♣ against Noah Boeken´s 7♠ 7♦. Boeken – who had now acquired the nickname “Buster Boeken” from his supporters three deep on the rail – then moved into the chip lead when he made a hero call with just Ace high (A♥ 10♥) against Luuk Gieles´ attempted bluff, and scooped a pot in excess of 1.5 million chips.

Combes and Chen Bust as it Gets Tight at the Top

Noah Boeken temporarily stormed into a huge chip lead with the elimination of Charlie Combes in sixth (4♠ 4♥ > 2♣ 2♦), but he allowed Clyde Terlaan to draw level at the top of the leaderboard when three streets of aggression failed to force Terlaan off a hand in which Boeken (2♦ 7♠) had made two pairs, but Terlaan rolled over a better two pair (A♠ 6♠) to take down a 1.3 million chip pot.

Simon Persson also moved up into contention at the top of the leaderboard when busting Andrew Chen A♣ 9♦ > A♦ 8♣ and, as play went four-handed, it was former chip leader Luuk Gieles who was the shortest stacked of the remaining players.

Noah Boeken was the strongest player in four-handed play, but Simon Persson moved into the chip lead when forcing Clyde Terlaan off of a ½ million chip pot with a shove on the River. Persson extended his lead in the tournament when busting Luuk Gieles in fourth place Q♦ Q♣ > A♣ 5♥ and Clyde Terlaan in third Q♠ J♣ > 3♦ 4♠ – after the chips all went in on the flop of Q♦ 9♦ 4♥ – to take a 5.53 million -v- 3.41 million chip advantage into the heads-up.

An hour of heads-up play saw little change in the relative chip stacks and, as the clock moved on to 3.00am, the decision was made to halt play for the night and resume again on Saturday.

Getting lucky in significant hands had earned Luuk Gieles the title of “Lucky Luuk”, but the good fortune at the tables did not cease with Gieles´ departure in fourth – it just transferred over to Noah Boeken. However, the resumption of the heads-up climax to the Master Classics of Poker Main Event did not start well for Boeken, as Simon Persson twice forced him off of two substantial pots to extend his lead to 6.55 million -v- 2.4 million chips; but Noah Boeken battled back; and three consecutive uncontested post-flop shoves saw the chip stacks level up.

Boeken then moved into the lead for the first time in the heads-up when rivering a Spade flush with A♠ 3♠ to best Persson´s (9♥ 10♣) flopped second pair and missed straight draw; and he reduced the Swede to 1.7 million chips with two further uncontested shoves as the blinds rose to 50,000/100,000 (ante 15,000).

In the final hand of the 2013 Master Classics of Poker Main Event, it looked as if Simon Persson had picked the right spot to get his remaining chips in with J♦ J♠. Noah Boeken called with 7♦ 7♠, and Persson was looking good for a double-up after the flop of Q♠ 6♣ 5♥; however the 7♥ was dealt on the Turn – giving Boeken a set – and the River card 2♦ sent the assembled crowd at the Holland Casino into raptures, as their local hero claimed the MCOP Main Event and the €306,821 first prize.