Only 30 players remain in the PartyPoker WPT Merit Classic in Cyprus, with Antonio Buonanno ending Day 3 as he started it – at the head of the chip counts. 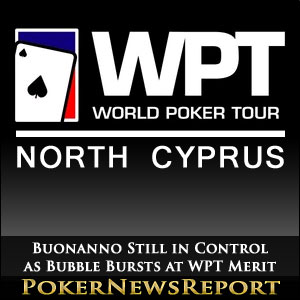 Only 30 players remain in the PartyPoker WPT Merit Classic in Cyprus, with Antonio Buonanno ending Day 3 as he started it – at the head of the chip counts.

Day 3 of the PartyPoker WPT Merit Classic in Cyprus was a day of two halves – the first half being a very tense approach to the forty-five player bubble, and the second half having a more subdued feel to it; with fifteen players busting out of the event during the final couple of levels to leave a field of thirty.

Going into Day 3, the chip lead was held by Antonio Buonanno; and he got the best possible start to the day when eliminating Toni Judet with pocket Nines > pocket Eights. Toby Lewis also chipped up throughout the first couple of levels, and it was Lewis who held the chip lead as the bubble approached courtesy of an A♠ A♥ > A♣ K♦ encounter against Ali Hassan.

How Does Trickett Do It?

Hand-for-hand play started during Level 17 (blinds 2,500/5,000 – ante 500) and lasted more than an hour. During that time there were some remarkable escapes from elimination, but none more spectacular than that of Sam Trickett.

In yesterday´s PokerNewsReport, we reported on how Trickett had hit runner-runner Quad Aces to eliminate Harprit Gurnam and, while hand-for-hand play was in progress, Trickett pulled off another miraculous victory in a hand he was destined to lose.

With the board showing K♠ 10♥ 9♦ / A♣ and more than 100,000 chips in the pot, Alexander Lakhov announced he was all-in. Sam Trickett made the call and the cards were on their backs:

Sam Trickett: K♣ K♦ for a flopped set of Kings

Lakhov was a ¼ favourite to win the hand and eliminate Sam Trickett as the PartyPoker WPT Merit Classic bubble boy, but the 9♥ spiked on the River to give Trickett a Full House and enable him to survive.

Several more intense all-in encounters occurred throughout the rest of the level – Oleksandr Gnatenko finding a Jack to double up against Serdar Saglum A♦ J♦ > A♣ 5♠, and Markus Ross flopping a Full House with pocket Fours to double up against Nicolas Chouity´s flopped trip Jacks.

Eventually one hand had to go against the player at risk, and Louis Salter ended up being the unfortunate bubble boy after moving all-in with A♦ K♥ and running straight into Nicolay Baryshnikov´s A♥ A♠. With no surprises on the board, Salter was eliminated in forty-sixth place, while the remaining players were assure of a $8,500 min-cash.

During the steady stream of action that followed, Toby Lewis lost the chip lead when doubling up 888Poker´s Sofia Lovgren J♣ J♠ > 4♥ 4♣, and Antonio Buonanno reclaimed his position at the top of the leaderboard by busting out Danny Laming in thirty-fifth place 9♠ 9♣ > A♦ J♦ – Buonanno turning a set of Nines.

The final player to bust on Day 3 was Sam Trickett – ironically in a hand against Alexander Lakhov. Trickett had moved all-in with K♦ Q♠ against Lakhov´s A♦ J♦, but he found no help on the board of A♠ 10♦ 7♣ / 3♠ / 5♠ to leave the WPT Merit Classic in thirty-first place.

Looking Ahead to Day 4 of the WPT Merit Classic

With just thirty players remaining in the WPT Merit Classic, Day 4 promises to be another tense affair. Play is scheduled to continue until a final table of six is set and, with ever-increasing pay jumps as the final table approaches, it could well be a very long day for some.