Bryn Kenney steam rollered his opponents into the ground in the €10,000 buy-in Master Classics of Poker High Rollers Event to collect the €102,960 first prize. 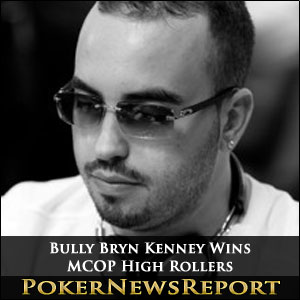 Bryn Kenney steam rollered his opponents into the ground in the €10,000 buy-in Master Classics of Poker High Rollers Event to collect the €102,960 first prize.

The Master Classics of Poker High Rollers Event attracted a significant number of players that had been involved in the MCOP Main Event, and consequently when play got underway on the first of two days on Friday, there were just seven players entered into the tournament.

As players bust from the Main Event, those with deep pockets joined the event so that – when registration closed – there were a total of twenty-six entries from fifteen different players, creating a prize pool of €257,400 which would be shared by the top four players only.

After eleven hours of play on Friday, the final table of nine was set without those that had been eliminated when it was too late to re-enter – Michiel Brummelhuis, Martin Finger, Jonathan Karamalikis, Robert Soogea, Pascal Vos and Marcel Verheul – with Ole Schemion at the head of the chip counts.

When play resumed at the Holland Casino in Amsterdam on Saturday, blinds were 300/600 with a 75 chip ante, and it was not long before the action was driven by the short-stacked players. Rens Feenstra got valuable double ups against Bryn Kenney (A♦ Q♣ > A♠ 10♥) and Ole Schemion (A♠ Q♣ > 10♠ 10♦), but Ognjen Sekularac was not so fortunate when he shoved the last of his chips into the middle with A♣ Q♥ and failed to improve against Clyde Tjauw Foe´s A♠ K♣ to be eliminated in ninth.

Rens Feenstra continued his ascendancy up the leaderboard when busting Raoul Refos in eighth 3♥ 3♦ > K♦ J♥, but his chip stack took a massive hit from Joep van den Bijgaart (7♥ 7♣ > A♠ 8♠) and he was bust in seventh when his paired J♣ 10♣ was out-kicked by Bryn Kenney´s A♥ J♦.

Meanwhile Ole Schemion was knocked off the top spot by Govert Metaal A♥ J♦ > K♥ Q♠, before Bryn Kenney completed the former chip leader´s demise when the two players got all-in on a flop of 6♣ 7♥ 4♣. Bryn Kenney´s (4♦ 4♠) set of Fours held against the missed flush draw and top pair of Ole Schemion (7♣ 8♣), and Schemion was out of the High Rollers in sixth – Kenney now into the chip lead.

With five players remaining – and only four to be paid – the dynamics of the game changed considerably. Over the next few hours, Bryn Kenney extended his advantage by raising pre-flop in practically every hand and forcing folds from his opponents. Jorn Walthaus improved his chip stack when his A♦ A♠ held against Govert Metaal´s A♥ Q♣, and a double-up by Clyde Tjauw Foe A♦ K♠ > A♣ Q♥ only momentarily put the brakes on Kenney´s steam roller performance.

Ultimately it was Clyde Tjauw Foe who was to be the Master Classics of Poker High Roller “bubble boy” when he moved all-in with A♠ Q♣ and failed to improve past Kenney´s 7♠ 7♣ to be eliminated in fifth. However, despite the remaining players being in the money, the pace of the game did not speed up a great deal.

Due to the substantial pay jump between second and third place, neither Jorn Walthaus nor Govert Metaal were taking any risks as Bryn Kenney continued his dominance of the MCOP High Rollers Event. However, with blinds rising to 2,000/4,000 (ante 500), and the button coming around much quicker during three-handed play, it was just a question of time before one of Kenney´s opponents put their tournament life on the line.

Eventually, it was Jorn Walthaus who took a chance from the Small Blind with 4♠ 4♥ and called Kenney´s Big Blind shove with A♠ K♦. Unfortunately for Walthaus, the A♥ was the window card, and he was eliminated from the event in third.

Despite being in a fairly hopeless position, and at a nine-to-one chip disadvantage, Govert Metaal put up a good fight for an hour of heads-up play. Eventually the MCOP High Rollers was decided on a coinflip hand which could have gone either way – Metaal shoving all-in with A♠ J♠ and getting a call from Kenney (9♣ 9♥).

The 9♦ on the flop of 9♦ 3♥ 10♣ looked to have sealed victory for Bryn Kenney, but the 7♦ on the Turn gave Metaal hope of a gutshot straight. However, the River card J♦ only gave Govert Metaal a pair against Kenney´s set, and Bryn Kenney had steam-rollered his way to success in the Master Classics of Poker High Rollers.