Full Tilt Poker is offering players the chance to “Build Your Own Bonus” up to $400.00 in a unique promotion which launches next Monday. 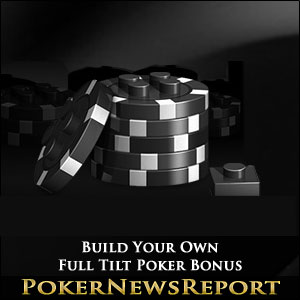 Full Tilt Poker is offering players the chance to “Build Your Own Bonus” up to $400.00 in a unique promotion which launches next Monday.

Full Tilt Poker is launching a “Build Your Own Bonus” promotion next week which enables existing players on the site to add up to $400.00 to their bankroll. Players have to opt-in to the promotion through the FTP poker software and then earn at least one Full Tilt Point on five days or more from Monday August 19th to Wednesday August 28th to qualify for one of five bonus levels.

The more FTP Points players earn during the qualifying days on which they log in and play on Full Tilt Poker, the higher the bonus they will be entitled to. 40% of the bonus will be released immediately (on Thursday August 29th), with the other 60% paid into players´ accounts as they earn further Full Tilt Points over the second stage of the promotion.

Build Your Own Bonus – Stage 2

The second stage of the promotion runs between Thursday August 29th and Saturday September 7th, when players will have as many days to clear the remaining 60% of their bonus as they logged in to qualify for it. For example, if a player plays on Full Tilt Poker for seven of the ten qualifying days between Monday August 19th and Wednesday August 28th, they then have seven days from Thursday August 29th in which to earn the Full Tilt Points to clear the remainder of their bonus.

The remaining 60% is released in three equal increments at the clearing rate of 25 FTP Points per dollar – so if the player in our example above eared 5,000 FTP Points during the stage 1 qualifying period, he or she would receive $80.00 instantly and three further cash bonuses of $40.00 each time they earn 1,000 FTP Points within the days available to them in Stage 2 (Full Tilt Poker awards Points at the rate of 10 per dollar raked or paid to enter a Full Tilt Poker tournament).

Any bonuses which have not been cleared by the end of the promotion will be awarded as “instant cash” on a pro rata basis.

A Bit Complicated, But Worth Building

This latest Full Tilt Poker promotion could have been easier to understand but, once players are aware of the requirements, it should add up to a few dollars more in most players´ bankrolls. We have tried to break it down as follows:-

Our player (who we shall call Gus Blomdwan) plays on Full Tilt Poker for seven of the ten qualifying days between Monday August 19th and Wednesday August 28th and earns 5,000 FTP Points

Gus qualifies for a bonus of $200.00 – $80.00 of which is paid instantly into his account. Gus now has seven days from Thursday 29th to earn the FTP Points required to release the rest of the bonus.

Gus needs 1,000 FTP Points to release each $40.00 increment of his outstanding bonus, and he receives one early into his session on Sunday 1st September and a second bonus amount when he finishes playing on Tuesday 3rd September.

Unfortunately, as he only had seven days available to him in Stage 2, Gus missed out on the third increment of $40.00 he was entitled to but, as he had collected 500 FTP Points towards his bonus, picked up $20.00 as a pro rata bonus payment.

Full details of the offer, and terms and conditions of the “Build Your Own Bonus” promotion can be found on the Full Tilt Poker web site.