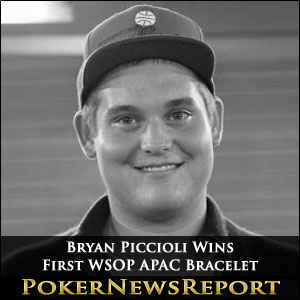 The whole of the final day of the WSOP APAC Event #1 was an absorbing affair after the 1,085 entries to the “accumulator” tournament (many of them multiple entries) were whittled down to a final nine. Among those nine there was a wealth of WSOP pedigree – with WSOP Main Event winner Jonathan Duhamel still involved and also Jeremy Ausmus – who had cashed in fourteen previous WSOP tournaments, including last year´s Main Event.

Bryan Piccioli also had a little WSOP history – the 23 year-old appearing on the final table of one of last year´s $1,500 buy-in “donkaments”. The native New Yorker had already enjoyed a little good fortune early in the tournament – busting out of Day 1A and Day 1B, and only resurrecting his challenge with an A♥ A♣ > Q♦ Q♠ hand towards the end of Day 1C – and gained the overnight final table chip lead courtesy of three fortuitous hands in which he knocked out Antoine Saout in twelfth (10♣ 10♦ > J♥ J♦), Alek Givotovsky in eleventh (9♥ 7♥ > K♣ K♠) and Ash Gupta in tenth (6♠ 6♦ > A♥ K♠).

Explosive Start to the Climax of Event #1

With the first ever Asia-Pacific WSOP Bracelet at stake, onlookers may have been forgiven for expecting a sedate introduction to proceedings but, in hand 3, Ryan Otto ran his Q♦ Q♠ into the A♠ K♣ of Jonathan Duhamel and, when Duhamel spiked the A♥ on the river, Otto was bust in ninth.

One hand later, Peter Kleudgen was sent home in eighth after having his A♥ 10♣ shove called by Jonathan Karamalikis (7♣ 8♣), who then hit 8♥ on the flop and 8♠ on the turn for trips against Kleudgen´s Ace high. Iori Yogo´s challenged also wilted quickly – putting his hopes of a bracelet on A♠ 2♠, and finding Junzhong Loo´s A♦ J♦ too strong.

The quick-fire action was never likely to be maintained and, as the tournament finale went six-handed, play slowed to a crawl. The next player to leave – Graeme Putt – did so in unfortunate circumstances when calling Jonathan Karamalikis´ 4♥ 5♥ pre-flop three-bet with Q♥ 10♥.

The much-journeyed Australian looked good to double up against his compatriot when the Q♦ appeared on the turn after a flop of A♠ 7♥ 8♠, but the 6♥ on the river gave Karamalikis a straight and sent Graeme Putt to the rail in sixth.

Experience Counts for Nothing with These Cards

The next two players to go were those with the more substantial WSOP experience. Jeremy Ausmus had seen his stack chipped away by the aggressive Junzhong Loo and, when Ausmus had attempted earlier shoves, he had found no takers. Eventually the two forces met, but Loo was to come off the best and send Ausmus out of the tournament when his A♠ J♦ bested Ausmus´ A♦ 7♥.

Jonathan Duhamel was quickly to follow in fourth place. Junzhong Loo was again the aggressor; raising the stakes in each round of betting and eventually forcing Duhamel all-in on a board of 8♥ 2♥ Q♦ / A♣ / 10♦. Duhamel had been holding A♥ 8♠ for two pair, but quickly threw them into the muck and left the table in fourth when Loo rolled over Q♣ Q♠ for a set of Queens.

Junzhong Loo´s brief flirtation with the chip lead was, well, brief. Twice he doubled up Jonathan Karamalikis (A♦ 9♣ > K♣ Q♦ and 5♠ 5♣ > K♣ K♦}) and leaked a stack of chips to Bryan Piccioli when following an Ace-high board all the way to the river with J♠ 7♥. Eventually “Jay Loo” took one chance too many and ran his Q♠ J♦ into the A♥ A♣ of Piccioli.

Going into the heads-up, Bryan Piccioli had a chip lead of 2,022,000 -v- 1,249,000, and he maintained and improved that distance between himself and Jonathan Karamalikis for the next twenty-seven hands.

In the concluding hand, Bryan Piccioli raised from the button to 50,000 chips, to which Jonathan Karamalikis responded by three-betting up to 124,000 chips. That was enough incentive for Piccioli to shove all of his chips into the middle and Karamalikis called.

The board ran 9♦ 4♥ 3♥ / 5♦, and it looked as if Karamalikis was about to take the chip lead much to the home support´s delight, but the 2♠ on the river gave Bryan Piccioli a straight and the first WSOP bracelet to be one in the Asia-Pacific series.