Bryan Campanello won an exciting conclusion to the final WSOP Circuit Main Event prior to the National Championships that start on Thursday in Atlantic City. 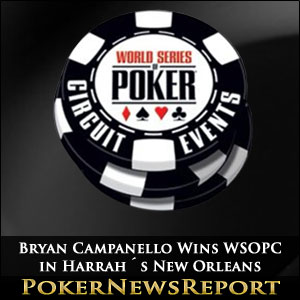 Bryan Campanello won an exciting conclusion to the final WSOP Circuit Main Event prior to the National Championships that start on Thursday in Atlantic City.

The Harrah´s Casino in New Orleans was the stage for the penultimate leg of this year´s WSOP Circuit, and there was an exciting conclusion to the main event as the chip lead changed hands numerous times in the heads-up battle between Bryan Campanello and Gary Friedlander.

Campanello had gone into the final table of the WSOPC Harrah´s Main Event as the big overnight chip leader, but faced potentially tough opposition in pursuit of the $175,459 first prize in the form of recent WSOPC Black Hawk winner Eric Blair, and WSOPC West Palm Beach final tabler Fadi Massaad.

Field Reduced by Half in First Level

The action continued at an extraordinary pace, and James Henson was eliminated in seventh place when his pocket Sixes failed to improve past John Kloch´s pocket Kings, while John Kloch himself hit the rail in sixth place when he moved all-in on the River with K♣ J♦ for second pair, and ran into Bryan Campanello´s (K♥ 6♥) turned flush.

Despite his two first-level knockouts, Bryan Campanello was not allowed to run away with the WSOPC Harrah´s New Orleans Main Event. Twice Gary Friedlander doubled through him to take the chip lead, before Campanello doubled back 5♠ 5♥ > K♠ 10♠ and then eliminated Eric Blair in fifth place A♦ 4♠ > 10♣ 10♠ to be the first player above 5 million chips.

The doubling-up continued, with Friedlander regaining the advantage K♠ 10♠ > 7♠ 9♥, before Campanello got back into the tournament with a flopped set of Fours to best his opponent´s pocket Jacks. Incredibly, Gary Friedlander moved ahead once more, and he reduced Campanello to just 13 Big Blinds as Level 30 started (blinds 40,000/80,000 – ante 10,000), but Campanello stormed back A♥ 8♥ > 10♠ 10♣ and three times moved all-in after the flop to balance up the chip counts.

Queens See Campanello on his Way to Atlantic City

By the beginning of Level 31 (blinds 50,000/100,000 – ante 10,000) Bryan Campanello had regained the advantage he had at the beginning of the heads-up encounter, and thereafter he was unstoppable. A Ten-high straight doubled his advantage and, in the final hand, he moved all-in pre-flop with Q♠ Q♥ and Gary Friedlander made the call with Q♣ J♠.

The flop of J♥ 6♥ 4♥ paired Friedlander´s Jack, but he was still behind Campanello´s dominating pair – and Campanello also had four cards to a Flush draw. There were no final twists on the board, and the Turn (4♣) and River (7♣) blanked for both players, giving Bryan Campanello victory with his pocket Queens, the $175,459 first prize and a seat in this week´s $1 million guaranteed WSOPC National Championships.