Bruno Lopes, a French rapper, has left the Aviation Club de France in Paris with the €100,000 top prize after talking the talk and walking the walk to emerge as the last player alive in the Diamond Championship at the Euro Finals of Poker (EFOP). 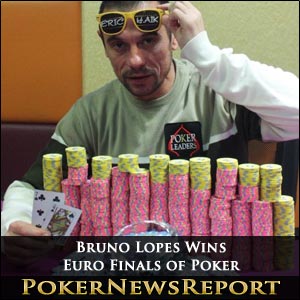 Bruno Lopes, a French rapper, has left the Aviation Club de France in Paris with the €100,000 top prize after talking the talk and walking the walk to emerge as the last player alive in the Diamond Championship at the Euro Finals of Poker (EFOP).

Lopes, who goes under the name of Kool Shen when rapping, has many strings to his bow as he is also a graffiti artist and break dancer – and can most definitely add poker to that list of skills after outlasting the 109-player field that created a €517,750 prize pool for this very first live tournament triumph.

The 44-year-old – who has been active in the music industry for more than 20 years – beat fellow Frenchman Aubin ‘Kzouls31’ Cazals, a gifted online player at PokerStars.fr – in their heads-up battle of the €5,000 buy-in No-Limit Hold’em event that left the latter with a runner-up prize of €94,760 after a deal had been struck.

While some poker commentators have pointed out that Lopes – who was a founding member of popular rap band Suprême NTM – has been sponsored by Leaders Poker for the past couple of years, the rapper himself was quick to respond by emphasising that, as he does not make his living at the felt, he can’t be considered a pro.

However, Lopes – who lives in Courbevoie just outside Paris – now has more than $350,000 in live poker earnings, so maybe he should consider a career change, although that is in no way a reflection on his hip-hop skills, of course.

As might have been expected, home-based players dominated as six French starters made the nine-handed final table, with Lopes and Cazals being followed by third-placed Jérôme Naye (€90,000), Alain Roy (€46,600) and Jean Noël Thorel (€38,830) to complete a Gallic clean sweep of the top five places.

The only reason it was the first seven spots, though, was because Englishman Zimnan Ziyard, of Eastbourne, took sixth place for €31,065 to squeeze experienced Frenchman Antoine Labat (€25,890) into seventh.

Notable by their absences from the top 10 – and, in fact, the money – were big-name pros such as Jonathan Duhamel, Bertrand ‘ElkY’ Grospellier, Ludovic Lacay, Basil ‘Basou’ Yaiche and David Benyamine.

However, other well known pros did find some success in Paris, with yet another Frenchman, Philippe Ktorza, taking home €7,765 for finishing in 14th place, while American star Shannon Shorr – the 2006 winner of the $10,000 buy-in Bellagio Cup for $960,690 – exited in 13th for the same amount and home favourite Manuel Bevand picked up €10,355 for his 12th place.

But it all came down to Lopes against young online specialist Cazals – whose previous biggest cash of $45,511 arrived at the start of last month when winning the €750 buy-in Irish Poker Championship at the World Poker Tour (WPT) Dublin event – over two hours of strong heads-up play.

Certainly, Stéphane Albertini, a Leaders Poker team-mate of Lopes, has been impressed by the new champion’s development as a poker player as he watched the rapper lift this biggest prize of his career to surpass the previous best of $46,819, which he collected for finishing 16th at the €10,000 buy-in WPT Grand Prix de Paris main event – also at the Aviation Club – back in May of 2010.

Fellow Frenchman Albertini – whose best cash also arrived in 2010 with $182,616 for his sixth-place finish at the €5,000 buy-in No-Limit Hold’em main event at the European Poker Tour (EPT) Deauville – reckons Lopes “thirsts for knowledge” so allowing him to become a better poker player by learning and assimilating “knowledge much faster than average”.

Referring to Lopes’ hip-hop career and his incredible success at the felt, Albertini added that, while many people understood that “Bruno could tame words, the world now knows he can tame the cards”, as well.

The Aviation Club de France (ACF), meanwhile, has announced that their eighth staging of the Paris Open of Poker (POP) – which runs from March 16 to 25 – will include two major tournaments.

The first is the eight-day €1,500 buy-in POP main event that runs from March 17 to 24 – which possesses a re-entry facility for all Day 1 eliminations to return on another opening day – while the second is the €750 ACF Poker Tour stop from March 24 to 25.

Dynamo Will Generate Excitement in Venice

Remaining on the continent of Europe, but this time in north-eastern Italy, the WPT Venice Grand Prix kicks off on Monday with the €4,950 buy-in main event.

But there won’t just be the attraction of watching some of the world’s best poker pros battle it out for the top prize, as railbirds will surely be more-than-happy to see the WPT’s Royal Flush Girls on hand to mix with fans throughout the tour stop that ends on the 10th.

However, while the stunningly beautiful Tugba Ercan, Danielle Ruiz, Angelique Velez and Ivy Teves will grace the card tables at the Casino di Venezia Ca Vendramin Calergi, a very special guest may well distract many of the young men hoping to catch the eye of one of the Royal Flush Girls.

How is this possible? Well, incredible English magician Dynamo will also be at the casino to perform – with team Party Poker Pro Tony G assisting in some way, although I’m not sure quite how – a special 90-minute set that will include some new illusions for the WPT Players Party guests on the seventh.

If you haven’t seen 29-year-old Dynamo – whose real name is Steven Frayne – then it is highly recommended you seek out some footage as the world-renowned magician as he dazzles and misdirects with his mystifying act.

Top 10 payouts from the Euro Finals of Poker €5,000 Diamond Championships: