A young British online poker player has successfully made the transition from website designer to semi-professional poker player after securing his first really big pay day with victory in the recent PokerStars UK & Ireland Poker Tour (UKIPT) event in Nottingham. 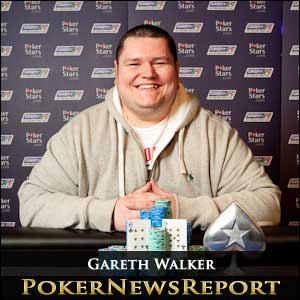 A young British online poker player has successfully made the transition from website designer to semi-professional poker player after securing his first really big pay day with victory in the recent PokerStars UK & Ireland Poker Tour (UKIPT) event in Nottingham.

Gareth Walker, of Jarrow in the north-east of England, quit his nine-to-five job to pursue his dream of becoming a poker player after lifting the Nottingham title in February and £109,000 (approximately $177,000 or €123,500) in prize money.

Walker has now collected about £200,000 in winnings since becoming a semi-pro poker player five years ago, but – after defeating a 1,058-strong field – has temporarily quit his freelance job to focus on live tournaments, as well as a little online poker.

The 28-year-old didn’t make this afternoon’s final day of the UKIPT £500+50 main event in Newcastle’s Aspers Casino after finishing down in 52nd place as Richard Sinclair heads the chase for the £67,000 top prize.

However, while Walker said that he “very much” wanted to win his local tournament as it “would be pretty special”, he’ll still have hopes of more success as the tour takes in nine cities around Britain.

He added that he no longer has “a day job”,  but the freelancer does expect to “go back to work” at some point while he uses his “winnings to have a break from work – maybe just for the summer”.

The computer expert – who first took up online poker in 2006 but then switched to live tournament play – has found the changeover something of a shock to his system as “most games are played at night”, although he did admit that he is a bit of “a night owl” and enjoys visiting “casinos once or twice a week”.

However, while Walker was initially “concerned” that he was providing opponents with tells “that you can’t pick up on when playing online poker”, he is content to realise that “the more you play the more you get used to” live poker games.

He is also convinced that he has learned many valuable lessons from the other poker players he has encountered as they can supply “support and advice”.