Craig McCorkell recorded his first major tournament victory by pocketing $368,593 for taking down event #36 at the World Series of Poker in Las Vegas. 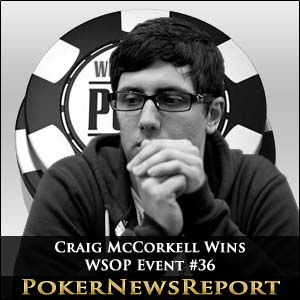 Craig McCorkell recorded his first major tournament victory by pocketing $368,593 for taking down event #36 at the World Series of Poker in Las Vegas.

The 26-year-old pro also notched Britain’s first gold bracelet of this 43rd annual staging of the series in the Amazon Room of the Rio All-Suite Hotel & Casino after what was undoubtedly the most thrilling and enjoyable final table of the 2012 festival.

McCorkell’s victory in the $3,000 buy-in No-Limit Hold’em Shootout did come as a major shock, though, as his WSOP record had not made good reading. He had notched two minimum cashes at this summer’s series for $13,666 in winnings from the eight previous events he had played, while last year saw the Brit go zero for 13 for a grand total of just $39,183 in lifetime WSOP earnings.

However, the West Sussex player – who was one of the 10 players at the final table on Day 3 – reckoned it was vital that he play quite tight, quite solid to get to three-handed with a chance of victory.

McCorkell’s triumph was a truly memorable occasion as, at one point during three-handed play, one-time gold bracelet winner Antonio ‘The Magician’ Esfandiari had approximately 75% of all the chips in play.

It seemed only a matter of time before the Iranian claimed his second bracelet, with McCorkell and eventual runner-up Jeremiah Fitzpatrick appearing to be jockeying for second and the extra $76,648 that went with avoiding a third place finish.

However, three brutal hands decided the fate of Vegas-based Esfandiari as he went from overwhelming chip leader to third place finisher at the ESPN Main Stage at the Rio.

Firstly, Esfandiari doubled-up McCorkell before then losing a huge portion of his stack after calling Fitzpatrick’s all-in move with 7♦ 7♠ when holding 9♦ 9♣. Fitzpatrick, of North Carolina, flopped a seven on the K♥ 7♥ 4♠ J♥ 5♥ board to leave Esfandiari with a little more than one million chips.

Esfandiari, with A♥ J♥, then called McCorkell’s all-in shove. The Englishman held A♣ K♥ and the board ran out 9♦ Q♠ 5♥ A♠ 9♠ to send Esfandiari tumbling further into the short stack.

No Luck for One-Time Chip Leader

McCorkell did concede that Esfandiari did run bad, especially he lost nines v sevens to have all the chips going into heads-up, although the champion did stress that he was still aware that anything could happen three-handed.

After all that excitement, Fitzpatrick started the heads-up battle with a 3,630,000 to 1,610,000-chip lead over McCorkell. However, the Brit fought back to level, before closing out the event only a few hands later.

Fitzpatrick had, however, shown a certain amount of resilience of his own before his revival came to a halt over two devastating hands. In the first, McCorkell three-bet before Fitzpatrick four-bet jammed. McCorkell called with 8♣ 8♠ while Fitzpatrick showed A♣ 8♦ but never connected with the 10♣ 6♦ K♥ 9♦ 10♠ flop.

McCorkell made the call while holding 8♦ 5♦ and Fitzpatrick tabled the 5♥ 2♣ to see a board of 8♥ A♣ Q♣ K♥ A♠ that ensured McCorkell had secured his first WSOP gold bracelet as his boisterous supporters went wild. Charlotte’s Fitzpatrick left with $228,261 as runner-up.