Michael Gathy has emerged victorious from event #21 at the World Series of Poker (WSOP) in Las Vegas to collect his first gold bracelet and $440,829. 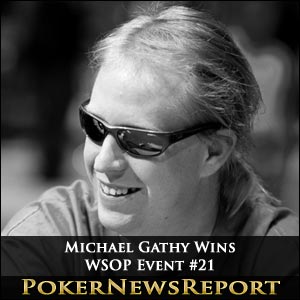 Belgian Michael Gathy has emerged victorious from event #21 at the World Series of Poker (WSOP) in Las Vegas to collect his first gold bracelet and $440,829.

The 23-year-old from Brussels overcame a 2,799-strong starting field in the $1,000 buy-in No-Limit Hold’em tournament to not only win, but also secure his first WSOP cash at the Rio All-Suite Hotel & Casino.

Full-time pro Gathy ultimately defeated California’s Jamie Armstrong in a heads-up battle that lasted two levels, with the runner-up collecting $273,776 for his troubles.

In what was an enthralling head-to-head, the chip lead changed hands numerous times as neither player could quite gain a meaningful advantage. However, the last hand of the event did eventually arrive during level 31, when the blinds were at 60,000/120,000 with a 15,000 ante.

The 17 players who made it into Day 3 of this event began their final push for glory at two tables in the Amazon Room of the Rio before moving to the nearby ESPN Main Stage once seven players – Hok-Leung Wong (11th), Derek Wolter (12th), Glen McCaffrey (13th), Randy Green (14th), Jonathan Poche (15th), Earl ‘Mitch’ Merritt (16th) and William Fichman (17th) – had been eliminated inside the first two levels.

Vegas’ Dan Smith was the first player to exit on the main stage about half-an-hour into 10-handed play when his A♥ 6♥ ran into the pocket eights of Canada’s Noah Vaillancourt. Smith fell just short of the official final table in 10th for $25,367.

California’s Joshua Field didn’t last long at the final table, hitting the rail in ninth place for $32,748 only minutes later. He shoved all-in while holding K♦ J♠ and Armstrong called with his pocket nines. Field had no luck on the 2♦ 8♥ A♠ 3♠ 2♠ and was gone.

Canada’s Jason Manggunio hit the rail in eighth place for $42,749 after moving all-in pre-flop against Eric Baldwin. Baldwin called to show A♠ 8♦ for a huge advantage over the British Columbia player’s A♣ 7♦. Both made top pair on a A♦ K♥ 9♦ 4♣ 5♦ flop, but Baldwin’s kicker eliminated Manggunio.

Seventh place and $56,453 went to Frenchman Jean-Louis Santoni after he lost out to British Columbia’s Vaillancourt. Under the gun, Santoni opened and then called Vaillancourt’s re-raise to see a flop of 4♦ K♥ J♦. All the chips hit the middle then, with Santoni showing Q♦ J♠ for second pair and Vaillancourt drawing live to a flush with A♦ 6♦. The 3♦ arrived on the turn to end Santoni’s challenge.

Baldwin – who, like Davis, lives in Henderson – was next to leave the final table in fifth place for $101,948. Baldwin four-bet shoved pre-flop and was called by Vaillancourt. The Canadian showed A♥ 4♦, while Baldwin revealed Q♣ Q♠ to be well ahead. However, Vaillancourt made it trips aces on a 2♠ A♠ 3♠ 6♦ A♣ board to send Baldwin out in what was his third WSOP final table appearance.

Just over 60 minutes past before Esposito hit the rail in fourth place for $139,457. He got unlucky when his A♦ 6♦ came up against the A♠ 8♦ of Armstrong. Both paired their respective kickers on a 6♠ 8♥ Q♠ flop, but Esposito failed to improve when the 5♣ arrived on the turn and the K♦ came on the river.

Vaillancourt – who had enjoyed a rollercoaster ride at the final table – finally succumbed when hitting the rail in third place for $193,089. Armstrong opened for 200,000 and Vaillancourt moved all-in. Armstrong called to show A♦ Q♣ for the pre-flop lead against Vaillancourt’s Q♥ 10♣. The 2♣ 9♣ K♥ 6♠ 7♦ changed nothing, so ensuring that Armstrong would face-off against Gathy for the bracelet and top prize.