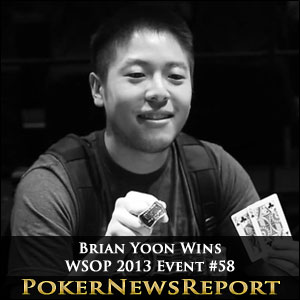 Yoon cleaned up the final table, eliminated most players in the final part of the day to take out the event and the top prize, which automatically tripled his career live poker tournament earnings.

Alex Case was eliminated from the event in eighth place after losing his last hand of the tournament to Joe Morneau. Down to his last 170,000 chips, Case moved all in before the flop with {10x} {9x} and was called by Morneau, who was outkicked with 10♦ 8♣.

Despite not being in front before the board, Morneau went ahead after the flop came 8♥ A♦ A♣. The 3♥ on the turn and the 5♦ on the river kept Morneau in front and Case was out of the final table.

The very next hand saw Kevin O’Donnell knocked out of the final table after coming on the wrong end of a showdown against Nghi ‘Henry’ Tran. O’Donnell went all in before the flop for his final 625,000 chips with K♥ Q♠ and was called by Tran, who was in front with A♣ 3♠.

Tran went further in front after the flop came A♥ 9♥ 9♦, which left O’Donnell in serious cards of cards on the turn and river. That did not happen, however, as the A♠ on the turn gave Tran a full house and stopped any chance of an O’Donnell resurgence.

Morneau was eliminated just three hands after O’Donnell’s elimination after losing his last hand to the eventual winner. Yoon, who had A♥ 8♥, went all in on the turn after getting a nut flush draw on the 9♥ 10♠ 10♥ 4♦ board.

He was called by Morneau, who had two pair with 9♦ 8♠. The river would be kind to Yoon, however, as it showed the 3♥, which gave him the flush needed to win the hand and knock Morneau out of the tournament in sixth place.

The floodgates stopped for a short while after the three quick eliminations, but it did not take a long time before fifth place was determined. That went to Tran, who ended up being Yoon’s second scalp on the final table.

Yoon then went on to claim his third straight final table scalp after knocking Justin Zaki out of the event. After a number of pre flop raises and reraises, Zaki went all in for 3.4 million with 9♦ 9♠ and was called by Yoon who was slightly behind with A♦ J♥.

The flop of J♠ 7♥ 4♦ put Yoon in front, with the 6♠ on the turn further strengthening his lead. The 10♠ on the river was of no help to Zaki and he was eliminated from the tournament in fourth place.

Roland Israeliashvili was eliminated by the eventual winner in the very next hand to put the event down to heads-up play. Israelashvili went all in before the flop with K♦ Q♠ but unfortunately for him, Yoon had A♠ Q♦ and he was not about to fold it.

Yoon’s hand held on the 2♥ 8♥ 6♣ 7♦ 6♥ board and Israelashvili was knocked out of the event in third place. Despite the sudden exit, Israelashvili’s performance was still good for a pay day of $295,433.

The elimination left Yoon and Cuong Van Nguyen as the last two players in the event, with Yoon holding a massive lead when heads-up play began. Despite Nguyen’s best efforts, it took Yoon just 11 hands to eliminate Nguyen en route to taking out the top spot.

In the final hand of the tournament, Nguyen raised to 450,000 with 10♣ 8♥, to which Yoon responded by moving all in with K♣ Q♣. Nguyen made the call and something needed to happen on the board if he was to stay in the event.

That looked like it was going to happen, as the flop came A♥ 10♦ 6♣, which gave Nguyen a pair, putting him ahead of Yoon. The 9♠ on the turn kept Nguyen out in front and he appeared well on the way to a much needed double up.

But that changed for the worse on the river when the K♥ was shown, which gave Yoon the higher pair to give him the hand and the event.