Brian Rast On Top After Day 1 of The Big One

American Brian Rast leads the way after Day 1 of the $1 million buy-in Big One for One Drop No-Limit Hold’em event #55 at the World Series of Poker in Las Vegas. 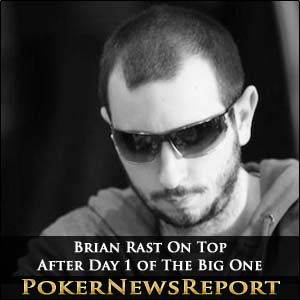 American Brian Rast leads the way after Day 1 of the $1 million buy-in Big One for One Drop No-Limit Hold’em event #55 at the World Series of Poker in Las Vegas.

The Vegas-based pro bagged up on 10,710,000 chips after nine levels of play in the Amazon Room of the Rio All-Suite Hotel & Casino to hold a healthy lead over 12-time WSOP bracelet winner Phil Hellmuth (8,395,000).

The opening day began with bags of glamour and excitement as the Cirque du Soleil gave a fantastic performance while all the entrants were announced to the fans in front of the ESPN cameras.

As expected, 48 players started the richest tournament in poker history, although just 37 remain after Day 1 with Florida’s Justin Smith the first to hit the rail. He lost a huge hand for almost all his chips just before the opening break when his eight-high straight was beaten by Frenchman Frederique Banjout’s nut flush. Smith was gone in 48th place on the first hand after the break when his Q♥ 5♠ couldn’t overcome the A♥ 10♦ held by Rast.

Two-time bracelet winner Rast then eliminated Vegas’ Andrew Robl after making the nut flush against the latter’s pair of kings. Robl and Rast got all the chips into the middle on a Q♣ 8♣ 4♣ flop, with the latter tabling A♣ K♠ and the former showing K♣ K♦. Robl was ahead, even through the 9♥ turn, but the 9♣ river gave Rast the club flush for the knockout.

Florida’s Mizrachi was eliminated in 39th place when losing out to veteran Mike Sexton. Three-time bracelet winner Mizrachi shoved all-in for his last 180,000 chips while holding 3♠ 2♣ on a A♣ K♣ J♠ 5♣ board, only for Sexton to call with Q♥ J♣. The 10♥ came on the river and that was Mizrachi’s million-dollar event ended.

No doubt all the Day 1 survivors will bring their A games today, with the railbirds sure to be thrilled by some exciting play.