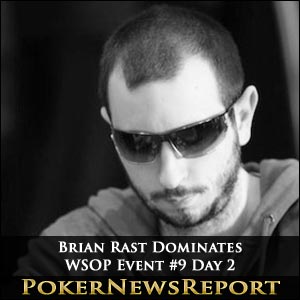 Day 3 Will Play Down to Final Table

Thereafter, it was about maximising profits as just 33 players survived to return for Day 3, when those remaining will aim to make the nine-handed final table. But they will all be chasing Rast, who held the chip lead for the majority of Day 2 as he dominated the tables.

Certainly, Englishman James Akenhead will testify to Rast’s good fortune – as well as skill – after seeing his aces lose to the American’s nines when a jack arrived on the river to complete a straight that sent the Londoner to the rail in 56th place for $10,201.

Akenhead – who finished in ninth spot at the 2009 main event – could hardly believe he had lost such a massive pot, but that is how hot Rast is running right now.

Jason Mercier In a Hurry

Jason Mercier, meanwhile, hit the rail in 260th for $3,216 and immediately left for the $5,000 buy-in Seven-Card Stud event #10 – not even stopping to collect his payout ticket!