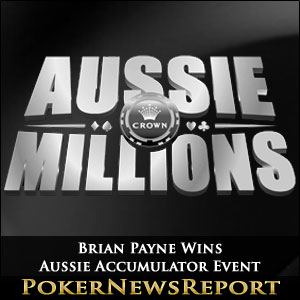 The Aussie Millions Accumulator Event #6 had a unique structure in which players had the opportunity to play in both opening flights of the AU$1,100 buy-in tournament and carry their combined chip stacks forward into the concluding Day 2 of the event.

The format enabled Adrian Stone to be at the head of the chip counts when the fifty-seven survivors (from the 599 entries) took their seats at the Crown Poker Rooms on Sunday in pursuit of the AU$130,000 first prize.

With only forty-five players due to cash in the event, it was a nervous couple of opening levels. Players such as Barry Greenstein (44th), Liv Boeree (13th) and last year´s winner of the Aussie Millions Main Event – Mervin Chan (18th) – all made it safely into the money, and the final table was set when overnight chip leader Adrian Stone was bust in tenth place.

Salter Bossing as Lodemel Falls Out with Queens

The early final table action of the Aussie Millions Accumulator Event revolved around Louis Salter, who had position on Shivan Abdine and bullied him out of several substantial pots. Salter took his chip stack beyond 2 million chips when his Q♠ J♠ paired on the flop to best Brian Payne´s A♠ J♦, but Payne gained his revenge when forcing the chip leader out of a 150,000 pot.

Michael Kanaan got off to the best possible start when he doubled up A♠ A♦ > Andreas Lodemel´s Q♠ Q♦; and pocket Queens were ultimately responsible for Lodemel´s elimination from the final table, when he moved all-in with Q♣ Q♥, received a call from Shivan Abdine (A♠ K♠), and watched the K♣ dealt as the window card. The full board ran K♣ 2♦ 10♠ / 2♥ / 7♥ and Lodemel was bust in Ninth.

The short stacks entering the final table did not fare too badly during the opening exchanges. Paul Sharbanee doubled up against Louis Salter A♦ Q♥ > A♥ J♣ and Sam Khouiss found that his 5♥ 5♦ was good enough against Shivan Abdine´s A♦ 8♥ to take him away from the immediate danger of the rising blinds.

Paul Sharbanee´s enhanced stack enabled him to take on and cripple Kevin Sharp 10♣ 10♦ > 8♦ 8♣, and Sharp was sent to the rail in eighth place by Brian Payne K♥ 10♥ > 9♠ 9♥ – before Payne moved into second place on the Aussie Millions accumulator leaderboard by forcing both Shivan Abdine and Louis Salter out of valuable pots.

Kanaan´s Day gets Better, but Payne Moves into Lead

Michael Kanaan´s good day got better when he flopped trip Aces to eliminated Sam Vakili in seventh place (A♥ 4♣ > K♦ J♥) and then rivered a Full House to bust Paul Sharbanee in sixth (A♣ J♣ > 10♦ 7♦); and he then moved into the chip lead when the Ace in his hand of A♦ 10♠ paired on the Turn to capture a valuable pot from Louis Salter.

Bryan Payne moved up alongside Michael Kanaan at the top of the leaderboard when he rivered a Queen in order that his Q♣ 10♣ would best Kanaan´s A♦ K♥, and he then crippled Shivan Abdine to move into the chip lead just prior to Abdine being eliminated by Sam Khouiss A♣ Q♦ > A♠ 10♥. As the four remaining players took a break at around midnight, their relative chip stacks looked like this.

Salter then attacked Brian Payne´s Big Blind with 7♠ 7♦ and ran straight into Payne´s 9♠ 9♥. With no two outer to save him, Salter was eliminated in fourth place, after which the three remaining players negotiated a deal which saw Brian Payne lock up AU$100,000, with Kanaan and Khouiss each assured of AU$75,000, and AU$25,000 left to play for.

Kanaan Out – Payne Agrees to Another Deal but Wins Anyway

With the deal done, Michael Kanaan did not want to stick around any longer. He moved all-in with J♠ 9♥ and received a call from Brian Payne who was holding A♠ 10♣. The board ran 5♥ 5♦ 7♣ / A♣ / 3♠ to bust Kanaan and send Payne into the heads-up against Sam Khouiss with a 5:1 chip advantage. Despite his massive lead, Brian Payne agreed to split the remaining AU$25,000 15/10, and the conclusion to the Aussie Millions Accumulator event was played out in the next hand.

Sam Khouiss raised to 100,000 chips on the button and Brian Payne called from the Big Blind. The flop of 8♥ A♦ 6♦ saw Khouiss check, Payne bet 150,000 chips, Khouiss re-raise to 300,000 and Payne make the call. After the J♠ landed on the Turn, Sam Khouiss declared he was all-in, Brian Payne snap-called and the cards were on their back:

Khouiss: A♠ 7♠ for a flopped pair of Aces

Payne: J♦ 8♣ for a Turned two pairs of Jacks and Eights

Khouiss needed a third Ace or a second Seven on the River, but the K♦ bricked for him, and Brian Payne had secured his most valuable victory (yet) in the 2014 Aussie Millions Accumulator Event.