Brian O´Donoghue triumphed on one of the closest final tables of the current Borgata Poker Open series to claim his third Borgata win in the 6-Max Event #17. 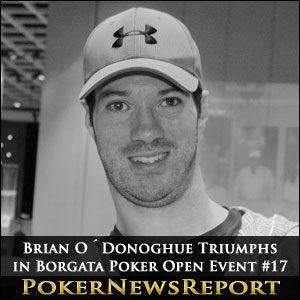 There was a prolonged conclusion to the two-day $1,090 buy-in 6 Max NL Hold´em Borgata Poker Open Event #17, as the six players who made up the final table were extremely closely matched in chips when the climax to the event started. As the blinds rose, any of the six players could have emerged triumphant in the event, but it was Bayside NY player Brian O´Donoghue who found the cards at the right times to win the tournament.

Twenty four of the 236 players who had entered the tournament returned for Day 2 – each assured on a $1,717 min-cash, but all hoping for a $60,663 payday and a Borgata Poker Open winner´s trophy. When play resumed at the Borgata Casino, the players were entering Level 15 (blinds 1,500/3,000 – ante 400) with some well-stacked chip leaders.

After one hour of play, the field had been reduced to eighteen. With the average stack of 262,000 chips, Abe Faroni and Russell Crane had been the primary benefactors of short-stacked players who had attempted (and failed) to double up within the first level, and Faroni jumped into a clear chip advantage (725,000 chips) when eliminating Dave Jones in fourteenth Q♠ J♦ > J♠ 9♦ and Mike Linster in twelfth A♥ 4♥ > K♣ 10♠.

However, as the blinds rose to 4,000/8,000 (ante 1,000) other players got in on the act and overtook Abe Faroni at the top of the leaderboard. Russell Crane was the first player to breach the one million chip mark when eliminating John DiBella in tenth position (A♣ K♣ > pocket Nines), but then Crane doubled-up David Randall (pocket Kings > A♣ J♦) before Brian O´Donoghue (K♦ K♠) rivered a flush to double up against Alex Rocha (set of Sixes).

Brian O´Donoghue then got a double-up against David Randall (A♦ K♥ > A♠ J♠) prior to busting Randall in ninth (A♥ 5♥ > Q♣ 5♠) to take a temporary chip lead, before he was overtaken by Alex Rocha and Ronnie Bardah – who eliminated Dan Gilmer in seventh (8♠ 8♣ > A♠ Q♥) to set up the final table.

There was very little change in the order of players through the next couple of levels. Kevin Calenzo made the most of the other player´s reticence to get their chips into the middle to chip up to over 600,000 chips, and it was just before midnight that the first elimination from the final table occurred – Abe Faroni moving all-in with pocket Tens and getting a call from Ronnie Bardah (A♠ J♠). The flop of A♥ 9♥ 3♦ paired Bardah´s Ace and, with no help on the Turn or River, Faroni was out of the tournament in sixth.

Heads-Up Over in One Hand

With such a big disadvantage to overcome, Alex Rocha took a chance on the first hand of the heads-up with 4♦ 4♥ and got a call from Brian O´Donoghue, who had been dealt 6♥ 5♥. The flop of 8♠ 6♣ K♦ paired O´Donoghue´s 6♥ and a black Four failed to appear on the Turn or River to save Rocha. With victory in the heads-up, O´Donoghue had wrapped up his third Borgata Poker Open triumph after winning two events in three days in September 2012.