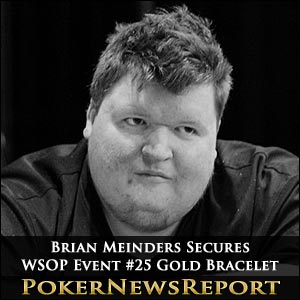 Having made it through the first two days of the $1,500 buy-in Limit Hold’em Shootout, Meinders returned for one more to outlast his final nine opponents and bag his first gold bracelet in the Rio All-Suite Hotel & Casino’s Pavilion Room.

Fifty players, however, did make it into Day 2 to guarantee themselves at least $3,088. But, of course, just 10 could make the final table, meaning the likes of Mike Leah, Matt Matros, Justin Bonomo, Scott Seiver, JJ Liu and Greg Mueller left with the minimum cash.

With the final table set for Day 3, Meinders eventually had to face-off against Vegas-based Darin Thomas for the title. Meinders held a fairly healthy chip lead as their heads-up battle started and continued with the aggressive play he had employed throughout the final table to ultimately overcome Thomas, who left with $71,704 as runner-up.

The final hand saw Meinders raise pre-flop and Thomas call to see a flop of 8♦ 10♠ 6♠. Thomas checked, Meinders bet and then Thomas raised, prompting and a succession of raises that ended when both were all-in.

Meinders showed 5♠ 3♠ for a flush draw, while Thomas held Q♦ 6♥ for bottom pair. The 4♣ turn might not have completed his draw, but did provide Meinders with a straight draw. Then the 7♠ arrived on the river to complete Meinders’ flush and straight for a spectacular end to the tournament.

Christopher Hartman Out in Ninth

Play was somewhat slow as the final day began, with the first elimination only arriving after nearly four hours of play, with Arkansas’ Christopher Hartman hitting the rail in 10th place for $7,164.

Hartman looked on as the 7♣ 9♣ 4♣ flop arrived, with Ramdin check-calling Schreiber’s bet. Both checked the 5♠ turn, while Ramdin check-folded Schreiber’s bet on the A♥ river. Schreiber showed A♠ J♣ for top pair and Hartman chucked his 10♥ 6♥ to make his way out of the event area.

Ninth place and $9,225 went to Washington State’s Ian Johns when he lost out to Brian Meinders, of New Jersey.

Johns raised pre-flop, but was met with a three-bet re-raise from Meinders. Johns then four-bet, only for Meinders to five-bet. Johns made the call, which put him all-in, to show the dominating A♣ A♠, while Meinders revealed J♦ J♥.

A Q♥ 6♥ 3♦ flop was placed on the felt to ensure that Johns’ aces were still in front. The 6♠ turn changed nothing, meaning Meinders needed one of the two jacks still in the deck to score the knockout. Of course, the J♠ came on the river to Meinders a full house to send a disappointed Johns to the rail.

New Jersey’s Sean Rice was out in eighth place for $11,992 just a few minutes later. Rice – who had doubled-up just two hands previously – raised pre-flop, only for Meinders to three-bet. The action folded back around to Rice, who then four-bet for Meinders to make the call to see a flop of 8♦ K♥ K♠.

Rice placed the remainder of his chips in the middle with A♥ 9♥ and was called by Meinders, who showed A♦ Q♥. Both had ace highs, but Meinders’ kicker was better. The board was completed with the 4♣ turn and 2♥ river to send Rice crashing out.

Schreiber was the unfortunate seventh placed finisher for $15,747 when he lost out to California’s Christopher Vitch. Schreiber was struggling against the blinds when he opened in early position before big blind Vitch three-bet, only for Schreiber to reply with an all-in move.

Houston’s Preston Derden was next to hit the rail in sixth place for $20,886. Ramdin, from under the gun, opened with a raise, while Maryland’s Brock Parker three-bet and Meinders – on the button – decided to four-bet. Big blind Derden, who was extremely short stacked, placed his final 20,000 into the pot, prompting Ramdin to fold.

But Parker made the call to see the A♦ A♠ 9♥ flop and then check-called Meinders’ bet. Both checked the 4♥ turn, while the 4♣ river saw Parker lead out and Meinders raise. Parker again made the call to reveal K♠ K♥, Meinders showed A♥ K♦ and Derden placed the Q♥ 9♥ on the table.

Derden had made a pair of nines on the flop, but couldn’t beat Parker or Meinder as the latter collected the pot.

Parker didn’t hand around too much longer, though, exiting in fifth place for $27,986. He opened with a raise, Vitch three-bet, Meinders called and Parker four-bet all-in. Vitch and Meinders made the call to see the 3♣ 9♥ K♣ flop. Vitch checked but Meinders bet, resulting in Vitch raising and Meinders calling. The K♦ arrived on the turn and Vitch bet once more. This time Meinders made a raise and Vitch called to see the 10♠ on the river.

Vitch check-called Meinders’ bet, with the latter revealing 9♠ 9♦ for a full house and the former mucking his hand. Parker then showed Q♥ 5♠, knowing he was beaten, and left the stage to collect his cash.

Ramdin hit the rail in fourth place for $37,897 after a rollercoaster of a level. He started his final hand by raising in the cut-off seat, only for big blind Mienders to re-raise. Ramdin called to see a flop of 5♣ 9♥ 8♠, with Meinders leading out and Ramdin raising to leave himself with very few chips remaining.

Mienders raised again and, all of a sudden, Ramdin was all-in with his Q♣ J♥ and the former showing K♥ 8♣ for middle pair. The 9♦ turn and 7♦ were no good to Ramdin and that was the end of his challenge.

The final knockout before heads-up play began saw Vitch eliminated by Thomas in third place for $51,861. On the button, Vitch opened with a raise and big blind Thomas three-bet. Vitch then made a four-bet and Thomas re-raised to put his opponent all-in.

Vitch called to show K♠ 5♣ while Thomas placed the J♦ 2♣ on the felt before a Q♠ 2♦ 10♠ flop came down to give the latter bottom pair. Vitch needed a five or king to stay in contention, but the deck provided him with no help as the 6♣ turn and Q♥ river arrived.